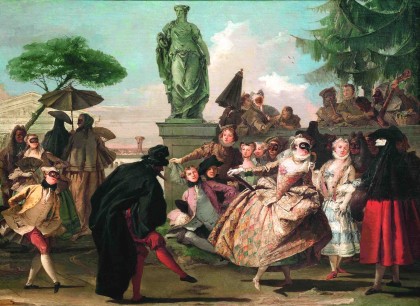 Art and Music in Venice from the Renaissance to the Baroque edited by Hilliard T. Goldfarb

Dancing, devotion, love, processions, pageants, concerts and spectacles to the accompaniment of silent music – Venetian art has them all.

In the early era of its history the depiction of music in Venetian art was largely confined to religious works, but by the late Middle Ages Venice's government had established splendid festivities accompanied by music to proclaim and promote the stable and enduring Republic. By the 15th century the ducal musical establishment of the Basilica of San Marco and the many processions through the city incorporated music to attract and sustain the attention of Venetians and visitors alike.

With the appointment of such internationally prestigious and acclaimed musicians as Willaert in the 16th century and Monteverdi in the 17th century, Venice's music establishment flourished and prospered. In the 17th and 18th centuries the religious charitable institutions of the oespedale, where foundlings and orphans were raised and trained in music by virtuosi such as Vivaldi, would give numerous concerts each day.

Venice was the city where opera was first successful as a commercial venture, leading to the construction of the new ‘opera houses’. Urged on by the city's renowned music printing and instrument-making enterprises, the Venetian musical landscape stimulated composition and creativity, so much so that Venice became known as ‘the city of music’.

The Montreal Museum of Fine Arts has been at the forefront of exploring links between music and art, even creating a new concert hall and resident music foundation within the museum complex.

Twenty concerts and seven lectures covering five centuries of music were presented in Montreal in conjunction with the exhibition ‘Splendore a Venezia: Art and Music from the Renaissance to the Baroque in the Serenissima’ which this book accompanied. After its Montreal debut the exhibition moved on to the Portland Art Museum in America.

Matteo Pagan's Procession of the Doge in Venice (1556–61) gives an excellent account of the line-up of prestigious members of the ruling elite and their coterie of musicians as they ceremonially process through the Piazza San Marco. The musicians, dressed in long sumptuous robes, play early trombones, cornets and trumpets, some of them particularly noted as being of silver.  Arrival of the Doge at San Giorgio Maggiore on Christmas Day (c.1610) by Giacomo Franco shows a choir of monks singing and waterborne instrumentalists accompanying the scene from their boats. Likewise, Franco's The Dogaressa leaving the Palace on the Bucintoro (c.1610) shows the grand ceremonial vessel of the Republic being accompanied by many smaller boats, some of which have musicians aboard playing trumpets and drums.

Illuminated music manuscripts of plainsong chants for the psalms, antiphonaries, missals and copies of mass settings provide a feast of illustrations. Canaletto's  interior view of San Marco (c.1760) shows the choir, dressed in white, singing to the right of the chancel. A Canaletto drawing (1766) shows the choir to the left of the chancel indicating that the placement of the choir was not absolutely fixed, and indeed at times two choirs, one at each side of the chancel, would sing together.

Portraits of private individuals playing instruments in a domestic setting illustrate that here we have one of the earliest representations of the act of making music in the secular sphere as an independent theme in its own right. Savoldo's Gentleman with a Flute (1530–5) shows a beautifully attired young man looking directly at the viewer as he holds his flute in his hands, his music propped up on the table in front of him. Saraceni's Lazarus and the Rich Man (c.1605) depicts music accompaniment at a banquet scene, a popular subject in Venetian art, other well-known artists who produced such works being Bonifazio Veronese and Paolo Veronese.  Dancing lessons, music lessons, domestic concerts and even 'Turkish' depictions by Francesco Guardi (1712–93) of women playing musical instruments in a harem (1742–3), all illustrate the rich vein of music in Venetian art.

Women's role in Venetian music-making, Venice's instrument manufacturing businesses, music printing in Venice, and street musicians all make their appearance in the text and images. And what about opera and those amazing opera houses with their fantastical stage sets? The final chapter reveals all.

Wide reaching in its span of topics, amply illustrated with examples of music notation, instruments and a vast variety of works of art showing music-making, accompanied by illuminating essays written by experts in the subject, and a clear and helpful timeline, this accompanying book to the exhibition ‘Splendore a Venezia’is a splendid object in its own right, both visually and intellectually.

Art and Music in Venice from the Renaissance to the Baroque