The art of chess 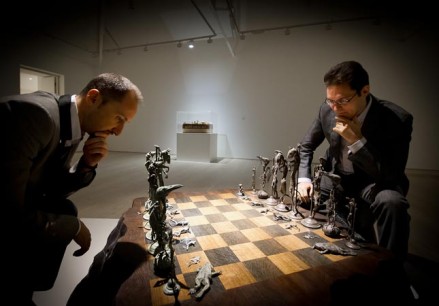 Some of the top grandmasters in the world have visited ‘The Art of Chess’ exhibition at the Saatchi Gallery to play a quick game on chess sets made by some of the world’s leading contemporary artists. Today, Wednesday 3 October, is the last chance to see the sets on display at Saatchi's, King's Road, London SW3 4RY.

The Art of Chess brings together 16 chess sets designed by some of the world’s leading contemporary artists in celebration of the ‘game of kings’ and its continued relevance to the creative arts.

Each set is individually crafted in a wide variety of different materials including wood, porcelain, glass, amber and silver.

This exhibition at the Saatchi Gallery is the first time that all 16 chess sets have been displayed together and it will also be the first public showing of a new commission by British artists Tim Noble and Sue Webster.

The four grandmasters are competing at the World Chess Grand Prix London – the first event in the new World Chess Championship cycle – which ends on Wednesday.  Boris Gelfand, from Israel, is currently leading the tournament.

The commercial rights to the World Chess Championship were recently accorded to Agon, a company set up by the entrepreneur Andrew Paulson.