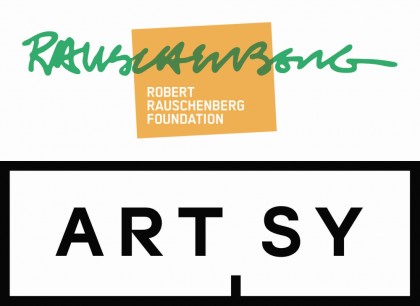 ‘This competition is directly in line with Rauschenberg’s ambition to break down barriers and make art more accessible’, said Christy MacLear, Executive Director of the Robert Rauschenberg Foundation:

Digital access to artwork images and archives will transform scholarship globally. This project will inspire new research and ideas from students who might otherwise have limited access to Rauschenberg’s works.

The jury for the Rauschenberg Emerging Curator Competition comprises five renowned artists, curators, and scholars—John Elderfield, Branden Joseph, Shirin Neshat, Christopher Rauschenberg, and Sarah Roberts—who will evaluate exhibition proposals that are related to the work of Robert Rauschenberg either presented on its own or juxtaposed with the work of other artists and artworks. Participants will submit exhibition proposals on Artsy.net, choosing from images selected by the Rauschenberg Foundation and from the 40,000 images provided by Artsy’s 230 museum and institutional partners, including the British Museum, Fondation Beyeler, J. Paul Getty Trust, Guggenheim Museum, San Francisco Museum of Modern Art, and others. In-depth research and archival materials will be accessible via the new Rauschenberg Foundation website and the SFMOMA Rauschenberg Research Project.

We are excited to collaborate with the Rauschenberg Foundation, not only to share an important body of Rauschenberg’s work with the public, but also to push the boundaries of research and curatorial work by spurring students across the globe to imagine new exhibitions and dialogues. Only through the visionary leadership of our institutional partners can Artsy pioneer these new learning opportunities.

In the spirit of Robert Rauschenberg, the jury seeks proposals that make unexpected connections and ponder new lines of questioning. In a career that spanned more than 50 years, Rauschenberg continually pushed the boundaries by using a multidisciplinary approach and defying expectation. His commitment to innovation and his fearless approach to art are characteristics that the jury will evaluate in the online exhibition proposals.

The judges will select three finalists whose proposals will be featured on both the Artsy.netand the Rauschenberg Foundation website and the winner will be selected by the general public through online voting. The winner will be awarded: 1) a letter of award signed by the panel of judges; 2) the winning curatorial proposal will be designed as an online exhibition on Artsy.net; and 3) a curatorial fellowship and honorarium enabling the winner to curate works from the Rauschenberg Foundation loan bank art collection to create an exhibition at the winner’s academic institution.

Central to the mission of the Robert Rauschenberg Foundation is fostering the legacy of the artist’s work and his long-term commitment to art education by providing broad public access to art. The foundation strives to encourage students and aspiring curators to actively engage with the work of Rauschenberg, his collaborators, and the artists who have been inspired by him. With the Robert Rauschenberg Emerging Curator Competition, the foundation seeks to nurture Rauschenberg scholarship and to expand the study of art through current digital means. When the new Rauschenberg Foundation website launches in late summer, students, aspiring curators, and the general public will have unprecedented access and information on Rauschenberg’s artwork and archives.

Artsy (Artsy.net) is a free online resource for learning about and collecting art, and it will host the competition as part of its ongoing mission to increase education and public access to art from around the world.

John Elderfieldis Chief Curator Emeritus of Painting and Sculpture, The Museum of Modern Art, New York, and a senior adviser at Artsy.

Shirin Neshat is an international artist, filmmaker, and recipient of the Rauschenberg Foundation’s One-to-One initiative, 2013.

About the Robert Rauschenberg Foundation

The Robert Rauschenberg Foundation fosters the legacy of the artist’s life, work, and philosophy, including the belief that art can change the world. The foundation supports initiatives at the intersection of arts and issues, which embody the fearlessness, innovation, and multidisciplinary approach that Rauschenberg exemplified in both his art and his philanthropic endeavors. Most recently, the foundation has broadened its philanthropic efforts from seven legacy grantees to 95 grantees across the USA; supported hundreds of artists who suffered the impact of Hurricane Sandy; and converted Rauschenberg’s home and studio in Florida into a dynamic residency program for emerging and recognized artists.

Artsy is the leading online resource for learning about and collecting art. It currently provides access to 125,000 artworks by 25,000 artists from 1,800 leading galleries and 230 renowned museums, foundations, and institutions, and it supports over 40,000 open-access images that are downloadable for free for educational use. Artsy is used as a teaching resource in classrooms around the world, including in public high schools as part of the NYC Department of Education’s Digital Ready program. Artsy is powered by The Art Genome Project®, a classification system and discovery engine. Since its launch in October 2012, Artsy has served 300 million artwork impressions to an international audience across 186 countries. By bringing together art and cutting-edge technology, Artsy aims to foster new generations of art lovers, museumgoers, collectors, and patrons.