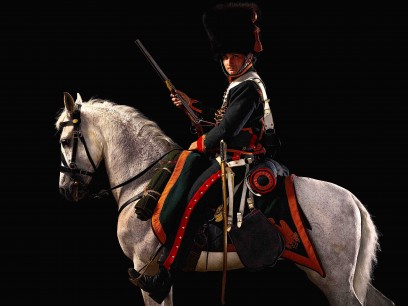 Imaginary portraits of the soldiers who served at Waterloo, photographed on the field by Sam Faulkner in commemoration of the Battle’s bicentenary

For the 200th anniversary of the Battle of Waterloo, Somerset House will present ‘Unseen Waterloo: The Conflict Revisited’, a series of portraits by photographer Sam Faulkner exploring how we remember the fallen from a time before photography was invented.

Since 2009, Faulkner has travelled to the annual Waterloo re-enactment in Belgium to photograph the ‘soldiers’ who take part. Each participant creates, with painstaking attention to detail, the historically accurate uniform he wears for the event. From Faulkner’s pop-up studio on the battlefield, he has made dramatic and painterly portraits that evoke the forgotten faces of Waterloo and re-imagine moments of glory, of hope and defeat. Curated by international stage director and designer Patrick Kinmonth, the exhibition presents 80 life-size images hung against a backdrop of Hainsworth fabric, the rich scarlet woollen cloth used to dress the ‘redcoat’ soldiers in 1815, still made today in exactly the same way at the original British mill.

The Battle of Waterloo was a landmark in European history – the closing charge of the first global conflict, the final defeat of Napoleon and the start of a sustained period of peace. It was also arguably the last great battle before the invention of photography. No individual record was made at the time of the 200,000 serving soldiers from either side – painted portraiture being the preserve of the richest in society.

By the time European nations fought again at Crimea in 1854, the war photographer had been born and changed for ever the way we remember. During the American Civil War of the 1860s, almost every soldier from the North or South, rich or poor, black or white, had their portrait taken before heading to battle. It put ordinary faces to the forefront of the national consciousness, laying bare the human cost of conflict and truly brought home the horrors of war. After Waterloo, 54,000 men lay dead, dying or injured on the battlefield – over one in four soldiers.

Sam Faulkner said:
‘Unseen Waterloo: The Conflict Revisited’ is my attempt to re-interpret and imagine the non-existent portraits from 1815. Waterloo is often cast as a battle between Great Men and certainly we’ve all seen the grand paintings of Napoleon and Wellington from the conflict, however we don’t have personal images of the men who actually fought and died that day. A hundred years later in the First World War, the fallen soldiers’ names are chiselled forever into granite in every town of Europe, but the forces of Waterloo are virtually unknown. This work attempts to reclaim the Battle of Waterloo for the valiant 200,000 who have been lost to history.

Sam Faulkner is best known for his documentary work including an extensive project about the war on drugs. He has worked extensively around the world including Afghanistan, Colombia, Haiti and Brazil. ‘Unseen Waterloo: The Conflict Revisited’ continues to explore themes of conflict and its legacy which characterize his earlier work, but with a radically new approach. To coincide with the exhibition, Sam Faulkner will also be self-publishing a book of the same name, which will be available from Somerset House.