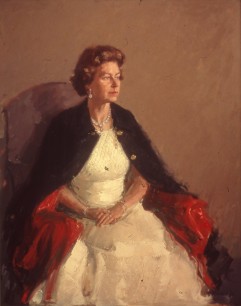 On the 9 September this year H M Queen Elizabeth II becomes Britain's longest reigning monarch, surpassing the record previously held by Queen Victoria. There have been over 150 portraits of her during her lifetime (2014 figures).

Over the years many artists from the Royal Society of Portrait Painters, which received its Royal Charter in 1911 have painted portraits of the Queen and several examples can be seen on the Society’s website which indicate the great diversity of their work. The Society commemorated the Queen’s Golden and Diamond Jubilees with a special gallery of royal portraits at their annual exhibition. One of its members, Anthony Williams, painted her as part of the Society’s Ondaatje Prize in the well-known portrait which hangs in its offices in Mall Galleries.

The Society’s artists derive inspiration from the old masters and with dedication and skill they have added considerably to the canon of royal portraiture which stretches back to the 15th century, when portraits became less stylized. The Queen’s image has been more widely seen than that of any other monarch. When it is captured on canvas, in an age of social media, the soundbite and instant celebrity, it has a welcome permanence and also continues an important and valued tradition.

The Queen is a figure who is recofnized internationally - the WorldWideWeb is a fitting place to display some of the many portraits of her.

The Royal Society of Portrait Painters is supported by Mall Galleries, The Mall, London, SW1.