An imaginary version of the past 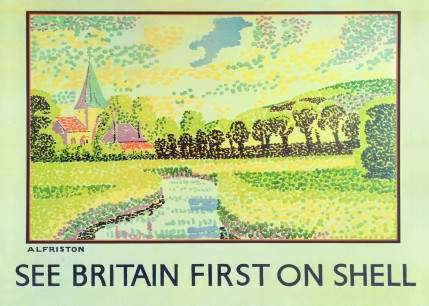 The British are constantly susceptible to bouts of nostalgia, to the allure of some past period of national cultural life.  This is always an imaginary and selective version of the past that tends to occur at times of economic difficulty and social uncertainty, rather than when the national mood swings towards confidence in future progress.  Romantic  Moderns reminds us not only of this familiar condition but also of its cumulative nature.

The content and design of the book seem to respond to the current attraction of the art of the 1930s and ’40s, to Edward Bawden and Eric Ravilious, Graham Sutherland and Paul Nash. This became known as ’Neo-Romanticism’, a movement that itself answered to the original Romantic period of the late 18th and early 19th centuries, with its own appreciation of inherently British aspects of nature and the emotional responses it engendered.

Alexandra Harris is concerned with the movement as a cultural whole. The several strands of art and literature, architecture – even garden design – are interwoven and mutually reflective.  But the ‘Modern’ must not be overlooked, for the intention was generally to find a way to use selected modernist techniques and attitudes in the quest to recuperate the best of the traditional cultural values and concerns that were seen to be endangered by the speed of technical progress.

Harris chooses two figures, Virginia Woolf (1882–1941) and John Piper (1903–1992), as touchstones to explore how these somewhat conflicting passions were played out during this period.

At the outset of the 1930s, Piper was an enthusiast of international abstraction in the manner of French painter Jean Hélion (1904–87), but he was soon to be found photographing early church sculpture in remote villages, although this was still with a nod towards the spirit of the primitive endorsed by the modernists.  By the wartime period, however, Evelyn Waugh was writing Brideshead Revisited, and his character of the painter and antiquarian, Charles Rider, seems  to be closely related to the reality of Piper, whose moody depictions of country houses typically fulfilled the qualities of ’pleasing decay’ that he admired.

Inevitably, these process of recuperation across all the arts emphasized national (in practice largely English) cultural characteristics and it is not difficult to see how this prospered in reaction to the growing threats from the totalitarian ideological conflicts looming on a global scale.  When Piper was recording fonts in village churches, Vaughan Williams was basing his musical compositions on traditional songs and dance tunes,  Virginia Woolf was gathering up country rhymes  and W.H. Auden was drawing together an anthology  based on the tradition of light verse.   This anxiety over the vulnerability of the ways and products of a fast disappearing pattern of life, one which particularly strengthened the idea of a common, shared culture, undivided between high and popular, acquired a particular intensity in the face of the fear and danger of wartime experience.

Alexandra Harris writes with a clarity and lightness of touch that is all the more admirable considering the extent of scholarship  and soundness of interpretation displayed. In complicity with the overall concept  and design of the book, which pays some homage to the period it examines, she inserts a ’break for refreshments’, looking at the cookery writing of the time. It is no surprise that it won the Guardian First Book award for 2010 and would be equally valuable to the general reader and the student.