The landscapes of Graham Sutherland – from neo-Romantic to other-worldly 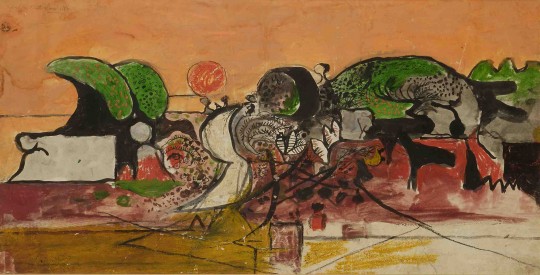 In his essay ‘A Welsh Sketchbook’ (Horizon, April 1942), the Neo-Romantic artist Graham Sutherland (1903–80) wrote about places that inspired his landscape painting. The county of Pembrokeshire was a prominent locality, first visited in 1934; ‘I wish I could give you some idea of the exultant strangeness of this place…The whole setting is one of exuberance – of darkness and light – of decay and life’. His descriptive words form the title of Abbot Hall Art Gallery’s welcome retrospective ‘Exultant Strangeness: Graham Sutherland Landscapes’ (until 15 September, 2013), which displays over 40 paintings and works of paper.

Graham Sutherland was born in Streatham in 1903, the eldest of three children. The family – his father a lawyer – moved to Surrey in 1910 and he attended Epsom College as a day boy but left before completing his education. In 1919 he joined the Midland Railway workshops in Derby as an apprentice engineer. A lack of mathematical ability turned him away from engineering towards his interest in art, and he obtained a place at Goldsmith’s College in 1920. It was here that his attention focused on engraving and etching and the works of masterful etchers such as Rembrandt and Dürer. In 1924 a friend, fellow artist William Larkins (1901–74), showed him a print by the Romantic visionary painter Samuel Palmer (1805–81), The Herdsman’s Cottage, 1850, a tiny etching, which inspired Sutherland, ‘I remember I was amazed by its completeness, both emotional and technical’.

In 1927 when Sutherland married Kathleen Berry he was working as a successful printmaker, exhibiting regularly in London and selling internationally, particularly to the American market until the Wall Street Crash of 1929. With the etching market now collapsed he focused on teaching, on book illustration and poster design. In 1934 his interest turned to the coves and roads and hills of Pembrokeshire. The brilliance of its light encouraged him to use a rich colour palette using vibrant greens, magenta, and sun yellow, deep orange and reds, with shapes outlined in black and strong shadows. Here Pembrokeshire Landscape – Valley above Porthclais, 1935 and Welsh Landscape with Roads, 1936, are superb examples.

At Abbot Hall the chronological display moves on to the landscapes of 1939–45.  Sutherland’s Entrance to a Lane, 1939, is an abstract vision of Sandy Haven, Pembrokeshire, the sharp colours drawing attention the organic shapes, capturing the ‘essence’ of the location. One can see nuances of Picasso in Green Tree Form, 1940,and Association of Oaks, 1939–40; and the strong colour-field – orange, yellow, red – used as a backdrop to the purple-tipped horned assemblage in Horned Forms, 1944, a nod toward the art of his friend Francis Bacon (1909–92),   too. The painting was based on a tree root stump that Sutherland found near his home in Kent.

Western Hills, 1938/41, rich in tonal reds and oranges with black, is a vision of the pre-historic Pembrokeshire landscape, the hills at Clegyr Boia. The painting was sold in 1938 but Sutherland asked for it to be returned, dissatisfied with its outcome, ‘it lacked body in certain places’, he said. It was completed in 1941. Estuary, 1946, in gouache and crayon on paper, was a final work before he headed to the South of France for his first visit in 1947.

In France, Sutherland made sketches on location, creating the paintings when back in Kent. He spent time with Francis Bacon in Monte Carlo and Nice and made new friends too, Matisse and Picasso. The section ‘Paths in the woods 1945–78’ explores this intense period in landscape, notably Tourettes, 1947 and Landscape near Nice, 1949. A return to Pembrokeshire in 1967, for the first time in 20 years, to take part in an Italian film about his life, re-awakened his interest in the Welsh landscape. It was a return to the ‘exultant strangeness’ of his most memorable works of art. Works on display show the potency of this latter period, Trees with a G-shaped Form I, 1972; Forest and River, 1971 and Untitled, Wavelike Form, 1976, to name just a few, are striking in colour and form.

From 1949 Sutherland also gained reputation as a society portrait painter but it is the landscapes that remain longer in the memory, from his early Neo-Romantic etchings to the strange, otherworldly forms of the Pembrokeshire years, each illustrating the ‘essence’ of the man and his art. This exhibition at Abbot Hall is an admirable addition to recent research on Sutherland, and a timely retrospective of his contribution to British landscape painting in the 20th century.

A full-colour catalogue (£12) to this exhibition includes essays by Nick Rogers, Curator of Lakelands Art Trust and writer and critic Andrew Lambirth. Exultant Strangeness: Graham Sutherland Landscapes, 2013. 64 pp., published by Lakeland Arts Trust, £12.00. ISBN: 9781906043148. The catalogue is available from the Abbott Hall Gallery and the publishers.