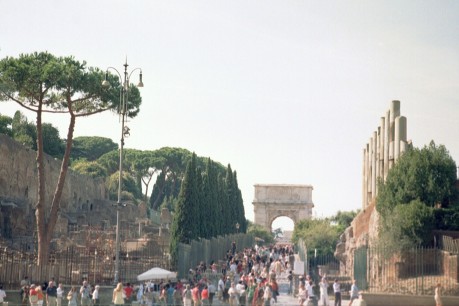 This ‘fascinating and encyclopaedic account’ reveals ‘the atmospheric underbelly, and an ever-present threat to the visitor’ faced by the art-loving ‘grand tourists’ of the past

Roman Fever: Influence, Infection and the Image of Rome, 1700–1870 by Richard Wrigley

The title of this book is a pun: the lure of Rome to the traveller, and the various ‘fevers’ it generated – the dark side of the city, all too often neglected by historians. As he writes, ’Belief in Rome’s magical properties has been so strong that it has blinded historians of journeys to and sojourns in the city and their artistic consequences to the intrusion of debilitating and sometimes fatal aspects of the local environment.’

This is certainly true for the general reader and potential visitor, entertained since the 18th century by travel literature generally selected and edited to show Rome at its best. Some, it is true, have included mention of the less attractive aspects of the city, but there has always been a tendency to omit, or to pass briefly over, discussion of the fact that any stay in Rome could be dangerous. But for those of us who have read original manuscript accounts, and studied the lives and deaths of visitors for whom the city was their final destination, Rome as a ‘feverish’ place is all too familiar. Art historians, however, have not really investigated these aspects in any systematic way. Wrigley’s study now brings together and investigates a great deal of original material on the subject.

In the 18th and 19th centuries, Rome was the goal of numerous students and artists from Northern Europe, keen to study both the ruins of ancient Rome and the art of more recent centuries. The Grand Tourists, mainly young men sent to travel around Europe to finish their education and acquire some sophistication (and art works), always made Rome their major stop. They were often more intent on pleasure than cultural study, but whatever their expectations of Rome, they found it a city of the past –and thus of the dead – as well as the present. A glorious and interesting past, maybe, but in the 18th century this lumber room of Europe was often perceived seen as a contrast to more ‘modern’ cities such as Naples, then (pre-unification) the capital of another country.

Wrigley’s book shows death in the historic present as well as the past: the atmospheric underbelly, and an ever-present threat to the visitor. He examines both the theories and experiences of these negative aspects: climate, disease, attitudes, and so on. He looks at what words and connections can actually mean – ‘influenza’ for example, as a malign ‘influence’ – while also describing the practical arrangements of Rome’s rubbish collections and re-cycling. As always, it is the foreigners – often long resident in the city – who have pondered on, and recorded, these matters. Rome is a city whose history has been documented rather more by its visitors than its residents.

Getting to Rome involved crossing bleak areas of often wild-looking land. Its sheer emptiness came as a shock to visitors whose knowledge of the Italian landscape came from lush images by painters such as Claude Lorrain. And once they arrived, they were often disappointed to find the city as filthy and smelly as anything in Britain. The ‘bad air’ – the ‘mal’aria’ from which the disease gets its name – was thought to cause disease. It made the prospect of exploring Rome, especially areas of the city off the beaten track, a threatening business. No wonder Northerners loved to visit the healthier and prettier hill country to the west of the city, where ancient Romans had also sought respite in their country villas.

This is a scholarly work, and its 218 pages of text are followed by 66 pages of often-discursive footnotes, and 29 pages of Bibliography (plus an Index). This might suggest a book that is a compendium of facts and figures, but in fact it’s a fascinating and encyclopaedic account, which reads well. Most people will probably dip into it rather than opting for a straightforward read, and I have found my interests best met via the Index. My only disappointment is that it ends in 1870, leaving a ‘fever’ cliff-hanger – the 20th century’s fevers are equally fascinating.