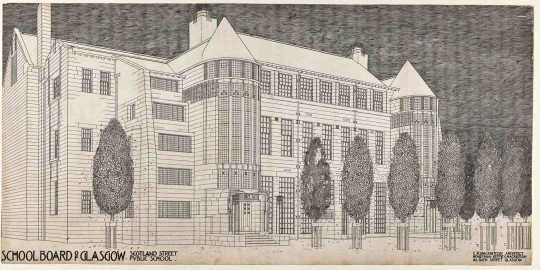 Mackintosh's work fell out of favour in the early 20th century but is justly celebrated now. Frances Follin reviews an exciting exhibition at RIBA, London

I first discovered the work of Charles Rennie Mackintosh in 1984, when one of my sisters married a Glaswegian and I went to visit them. We visited the Hill House at Helensburgh and I was hooked. Later I was able to tour the Glasgow School of Art, see the reconstruction in the Hunterian of the house once lived in by Mackintosh and his wife, Margaret Macdonald, have tea in what is left of the Willow Tea Rooms, and, some years later, visit the House of an Art Lover. The last was never built in the architect’s lifetime but was realized in the 1990s in a park in Glasgow.

Nothing can compare to visiting the actual buildings, of course, but if you are based in the south of England, or visiting London from abroad, a trip to Glasgow is quite an undertaking and would require at least one night in the city. While I would recommend making the effort – a few days in Glasgow will be quite enough to make you fall in love with the city – it may be that all you can spare is an afternoon. If that’s the case, then I suggest that you visit the Royal Institute of British Architects (RIBA) before 23 May. There you will see original drawings and recent models and video footage of beautiful and quietly impressive buildings created by this great architect, whose best work was created on the cusp of the 19th and 20th centuries.

Mackintosh was born in Glasgow in 1868, the fourth of 11 children (four of whom died in infancy) of a policeman, William McIntosh (sic) and his wife, Margaret Rennie. The family was not rich, but certainly far from poor and Mackintosh (he adopted this spelling as a young man) was partly educated at a private school. At 16 he left and was apprenticed to an architect named John Hutchison. He took classes at the Glasgow School of Art, then housed in the McLellan Galleries in Sauchiehall (‘Avenue of Willows’) Street. Mackintosh was, of course, later to design a new building for the School in its present location in Renfrew Street, and the Willow Tea Rooms in Sauchiehall Street for Kate Cranston.

After his apprenticeship, Mackintosh joined the firm of Honeyman and Keppie, and in 1901 became a partner in the firm. It was during his time with the firm that most of his major architectural work was realized.

Mackintosh left very few papers – a couple of diaries, a few letters – so there is much we cannot know about him. His testament is his work. As ‘genius’ does not happen overnight, it is not surprising that his early drawings are fairly conventional. His ideas really began to develop after his meeting with Margaret Macdonald, who later became his wife. She was one of a group of graphic arts students already experimenting with ideas gleaned from European, Celtic and Japanese art. Collaborating with Macdonald, her sister Frances and the latter’s future husband Herbert MacNair (‘The Four’), Mackintosh became the most important exponent of ‘the Glasgow style’, a Scottish variant of Art Nouveau. This then led on to the architectural designs and interiors (the latter being collaborations with Margaret) for which Mackintosh is known today. The buildings form the subject matter of RIBA’s impressive exhibition.

The show opens with a portrait of Mackintosh by Francis Newberry, the headmaster of the Glasgow School of Art, in 1914 when Mackintosh was about 46 years old – not the glamorous and romantic figure shown in the early photograph on our carousel. There is also a timeline of the architect’s life, showing parallel historical events. Projections of images of life in Glasgow around the turn of the 19th to 20th centuries give a flavour of the city that Mackintosh knew.

From there the visitor proceeds to a series of exhibition areas, documenting the work on individual buildings. Large and impressive drawings are accompanied by wall texts explaining the materials intended to be used in the buildings and interesting details about their construction. For instance, schools in Glasgow were normally built round a central hall, but at the Scotland Street Public School, Mackintosh designed an east–west corridor that allowed as many classrooms as possible to face south for the best light.

Notwithstanding the triumph of the School of Art (for which, of course, there are drawings and videos here), it is his domestic designs which best express the architect’s ethos and approach. As the National Trust for Scotland owns the Hill House, it is probably the best known of these. The exhibition includes short video pieces of houses that are still private residences: Windyhill, Ferndean,  Auchinibert and Mossyde and an extension for 12 Claremont Gardens, Glasgow. These allow us to see close up some of the detailing that went into these buildings: mouldings, stained glass, structural elements.

Sadly for us, a number of Mackintosh’s houses were never built but happily the drawings remain and are displayed here. There are also models to show the designs in three dimensions. In 1901, Mackintosh and Macdonald submitted plans to a Viennese competition for a ‘house for an art lover’ but failed to supply the stipulated number of drawings. No first prize was awarded and it is often thought that had they stuck to the competition rules, their design would have won. Despite this failure, the design was exhibited and reviewed widely in Mackintosh’s lifetime and is on show here.

There is plenty here to interest anyone who would like to know more about Mackintosh’s work. His designs for interiors and furniture are not covered and would be worthy of another show, but for a detailed visual account of his architecture you could hardly do better than this. The combination of drawings, models and videos, with succinct and informative wall texts, forms an engaging and informative display for which RIBA is to be congratulated.

Mackintosh's Masterwork: CRM and the Glasgow School of Art

CR Mackintosh: The Poetics of Workmanship

The Glasgow School of Art, designed by Mackintosh, was badly damaged in a fire, apparently caused by an overheated projector, on 23 May 2014. Tremendous efforts to save the building were largely successful but the Library –the most stunning room in the building and considered an architectural masterpiece around the world – was destroyed. A restoration appeal fund has been launched with a target of £20million.
Donations can be made via The BigGive.

A range of publications on Mackintosh's work are available at the RIBA bookshop. Some are suggested on the links above.

In Glasgow shops you will find many items for the home, plus jewellery, scarves and so on, made to designs that evoke Mackintosh's work - these are of variable quality, and are known in the city as 'mockingtosh'.