Piet Mondrian at Home and Abroad 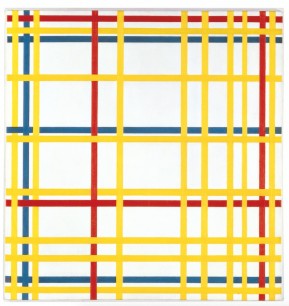 Piet Mondrian: Life and Work and Piet Mondrian: The Studios both survey the paintings of Piet Mondrian (1872–1944), Dutch pioneer of abstraction. Cees W. de Jong, editor of both of these monographs, writes ‘The road to abstract art was long, introspective, and full of difficulties. It took Mondrian well over thirty years’. We think of Mondrian’s classic grid paintings as the epitome of his art, yet they occupy less than half of a career that spanned 56 years.

Mondrian began as a realist and gained modest success as a landscapist painting murky views of trees and waterways near Amsterdam. In the late 1890s he worked alternately in realistic and art nouveau modes, sometimes painting the same motive in muddy impasto and then again in watercolour with arabesque lines. Later he adopted aspects of Impressionist technique.

A distinct change occurred when Mondrian engaged with (and later converted to) Theosophy, about 1899. He started to gradually simplify and whittle down landscapes to essential horizontal and vertical forms. Theosophy posits that certain basic underlying elements underpin all religions, and it seeks to make these fundamentals apparent. Mondrian’s early choice of symbols and radical simplification confirm that a spiritual aspect underpins some of his artistic decisions. Encountering Cubist art on a visit to Paris confirmed to Mondrian that he needed to break away from realism.

Trapped in neutral Holland by the outbreak of war in 1914, unable to return to Paris, Mondrian lived in Laren, an artist colony near the coast of North Holland. It was here that he detached his art from recognizable motifs and began working with detached black lines and planes of unmodulated colour, partly under the influence of painter and designer Bart van der Leck (1876–1958). Both these books reproduce some of van der Leck’s posters of that period.

In 1919 Mondrian moved to Paris and stayed there until the threat of war forced him to London in 1938 then to New York City in 1940, where he died in 1944. All the time he refined his style and ideas and was on the verge of a developing a new style when he died. His last two paintings include multicoloured lines and shapes within shapes, indicating a trend towards increased complexity and energy, influenced by the grid street arrangement and hectic energy of New York.

Mondrian was always keen to draw attention to his art. To disseminate his ideas about art, he used interviews and statements in arts journals, accompanied by eye-catching photographs of his studio. Atmospheric photographs by André Kertész of Mondrian’s studio in rue du Départ are reproduced in The Studios.

Life and Work offers a comprehensive view of the painter’s oeuvre. A year-by-year chronology outlines Mondrian’s artistic development in relation to events in his life. After an introduction, there are short essays covering Mondrian’s early years and involvement with Theosophy, the simplification of his forms and his studios in Paris and New York. There are many archive photographs of Mondrian, his studios and dwellings. An overview at the close of the book illustrates all Mondrian’s painted output (and a handful of drawings) at nine black-and-white images per page, which makes this book an affordable alternative to the bulky and pricey catalogue raisonné of 1998. It has relatively little text for such a large book and relies on its many, well-chosen illustrations. For anyone serious about Mondrian, Piet Mondrian: Life and Work is a good starting point.

The designers at Abrams have made the slip, which is becoming increasingly common in the publishing industry, of blowing up a detail of an illustration (in this case as two-page spreads to start chapters) to a degree where the pixilation of the source starts to become distracting. The normal-size illustrations are of high quality. This is a minor cavil for a book which is impressively produced and which will have appeal for both newcomers and long-time Mondrian fans.

Thames & Hudson’s The Studios examines Mondrian’s studios as microcosms of his thought. This was the subject of an excellent 2014 exhibition in Liverpool. Studios were spaces where Mondrian could experiment and inhabit the light and geometry of his art. The essays by specialists cover chronologically distinct periods, using the studio discussions as ways to introduce his life and practice of each era. The title includes much detail about Mondrian’s living and working conditions, explaining his places of residence and spaces used as studios. We are, however, plunged into Mondrian’s life in media res and non-specialists will be left floundering. It is all very well telling us that he may have paid little or no rent for such-and-such a room but from what sources was his income derived? Was he selling art at this time and if so, for what prices?

The Studios includes comprehensive plans and elevations of Mondrian’s studios, determined from eye-witness descriptions and photographs. Katjuscha Otte discusses the importance of music to Mondrian, who was devoted to jazz and a talented dancer. One of the most valuable parts of The Studios is the inclusion of theoretical texts by the painter explaining his stance on aesthetics, architecture and civic planning. The English translations are presented alongside the typographically distinctive original publications. It contains a chronology, bibliography and other data at the end.

The two titles share six of a total of eight contributing authors, so there is a considerable overlap between the books, though The Studios is more detailed and extensive in discussion. The overlap between titles even extends to illustrations. pp. 114-5 of The Studios and pp. 248-9 of Life and Work feature exactly the two same paintings facing each other in the same layout. Other layouts share paintings. The Studios shares the same fault as Life and Work, in that a handful of images are pixilated and substandard (in particular p. 41 of The Studios).

The Studios scores by being very reasonably priced, while Life and Work is more wide ranging. Ultimately, Life and Work will appeal to all lovers of Mondrian’s work; The Studios is best suited for those who wish to delve deeper into the artist’s theories, each being creditable in its distinct field.