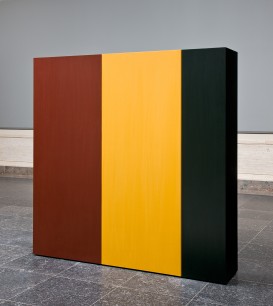 The National Gallery of Art has acquired Knight's Heritage (1963), a sculpture by Anne Truitt (1921–2004). Truitt originally trained in psychology, and worked as a nurse during the Second World War, later turning to writing as a career. She began to study sculpture in 1949, at the Institute of Contemporary Art, Washington. By 1961 she had developed the style for which she was to become known, producing painted, wooden sculptures. Her work is in a number of other major collections, including that of MoMA in New York and she was awarded the Cather Medal in 2003.