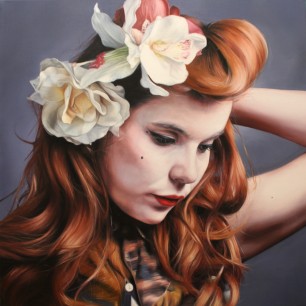 Never before seen intimate portraits of celebrity musicians are to be displayed to the public in a first of a kind free exhibition in London next month.

Brandon Flowers, Mark Ronson and Paloma Faith, are just some of the high profile subjects who have sat for figurative painter, Joe Simpson, the creator of the unique exhibition called ‘Musician Portraits’, which will be shown in a bespoke pop-up gallery for two weeks from October 14, 2011.

A series of 22 still paintings of famous singers and musicians will be on display in the converted library at 16/17 Greek Street, Soho. Each oil on canvas piece (60 x 60 cm) will present a different high profile musician in various guises from a wide range of musical genres and nationalities.

Maxi Jazz, David Gray, Jamie Cullum and Ezra Koenig (Vampire Weekend) have also sat for the project. Once the subjects agreed to be included in the series, the 27 year old met each musician to take photographs to work from and create the original oil paintings. Each portrait typically took two weeks to complete.

Joe has travelled across the country and all over the world to meet the musicians at their houses, studios and even backstage at concerts and arena tours, which means the exhibition is over a year in the making.

His work has already been recognized, with the portrait of Maxi Jazz from the series shortlisted for the prestigious BP Portrait Award 2011.  The painting has been exhibited at London’s National Portrait Gallery in an exhibition, which has been the most popular show in the gallery’s history. Because the painting is committed to the BP Portrait Award’s touring exhibition, and with Maxi’s permission, Joe has created a new portrait for his solo show.

Speaking on the idea behind the pieces, he explains:

‘The paintings have a physicality to them that you don’t get with a photograph. The paint has a specific weight and application and you can see layers and brushmarks in the hair and skin tones of the subjects.  I’m really excited to see all the paintings displayed together under one roof for the very first time.

‘I’ve tried to root each painting in a tradition of painted portraiture – each piece has a quiet, still and almost introspective feel. I’ve attempted to capture the way that each musician held themselves when I met them, usually I didn’t give the musicians a great deal of direction, or plan how I wanted the piece to turn out.’

After the exhibition the paintings will be sold and 25% of the sale will be donated to ‘Seeing is Believing’ (www.seeingisbelieving.org), a global initiative to tackle avoidable blindness. Standard Chartered will match the total donation from the sales.  The exhibition launch night on 13October coincides with World Sight Day.

Joe has often intertwined the two disciplines of music and art in his projects.  His first major solo exhibition ‘Almost There’ was a collaboration with twelve different bands and musicians to create a series of paintings with an original soundtrack.  The paintings were inspired by the ‘road-movie’ genre, and displayed with headphones beside each piece to simultaneously view the painting and listen to the song that had been specifically written for it.