A nativity at Dulwich 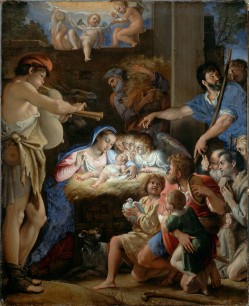 For the first time since 1971, Domenichino’s masterpiece The Adoration of the Shepherds, (c. 1607–10) returns to Dulwich to close the celebrations of the gallery’s Bicentenary.  Domenichino’s painting, believed in the 18th century to be the work of Annibale Carracci, was one of the most highly prized paintings in the collection of Noel Desenfans and Sir Francis Bourgeois, the Gallery’s founders, in their house in Charlotte Street, London.  The canvas was arguably the most important Italian 17th-century painting left by Desenfans and Bourgeois to Dulwich Picture Gallery in 1811.

The decision of the Governors of Dulwich College to sell the painting at auction on 24 March 1971 was heavily criticized by the public and press at the time and became a topic of heated discussion, as the will and donation of Sir Francis Bourgeois was openly contradicted.  The loss of this significant painting was mitigated by the fact that the canvas was acquired by the National Gallery of Scotland and was secured for a public institution in the United Kingdom.

Based on drawings by Carracci and possibly even on a lost painting by the master, The Adoration of the Shepherds is one of the masterpieces of Domenichino’s early career, while he still worked closely with Carracci.  A nocturne in the spirit of the Renaissance master Correggio, this sublime nativity scene marks the two hundredth Christmas of Dulwich Picture Gallery, the institution in which it was publicly displayed for more than a 160 years as part of the founding bequest.

Michael Clarke, Director of the National Gallery of Scotland, said: ‘We hope that the return - albeit fleeting - of this festive painting to what might be claimed as its original home will prove a fitting climax to the [Dulwich Picture Gallery's] Bicentenary celebration.’