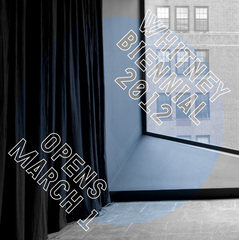 The Whitney Museum of American Art today announced the list of artists participating in the forthcoming ‘Whitney Biennial 2012’, which takes place at the Whitney Museum from 1 March 1 tuntil 27 May 2012. This is the seventy-sixth in the series of Biennials and Annuals that have been presented by the Whitney since 1932, two years after the Museum was founded.

In the Whitney Biennial the Museum gauges the current state of contemporary art in America. The 2012 Biennial is being curated by Elisabeth Sussman, Curator and Sondra Gilman, Curator of Photography at the Whitney, and Jay Sanders, a freelance curator. The curators began working on the research and planning of the show in early December 2010. Fifty-one artists have been selected. The Biennial comprises work – including paintings, sculptures, photographs, and installations – from both emerging and established artists.

In addition to visual artists, the exhibition includes a select group of filmmakers, choreographers, musicians, and playwrights. These multidisciplinary arts will be presented in a large open space in the Museum’s fourth floor galleries. The curators are working on the Biennial’s film programme with Ed Halter and Thomas Beard, the co-founders of Light Industry, a venue for film and electronic art in Brooklyn.

The exhibition will be accompanied by an innovative catalogue designed by Joseph Logan with contributions from each Biennial artist. More details on the artists, other Biennial projects, and the schedule of events will be released in January 2012.

Artists in the 2012 Biennial

In addition to the artists listed above, the 2012 Biennial will present two special curatorial collaborations with external arts organizations.

Arika, a UK-based group that organizes festivals of experimental music, moving image and sound will present their first North American program as part of the 2012 Biennial. The collaboration will take the form of a week of performances, workshops, and conversations that will capture interesting threads in North American listening, including contemporary poetry, noise, and music.

As a curatorial programming partner of 2012 Biennial, Artists Space Books and Talks in Tribeca will be the site of a weekly programme, curated by Artists Space, focusing on key concerns from the work of the exhibiting artists, as well as from the Biennial as a whole.

The fourth floor performance events will involve the artistic collaboration of Bentley Meeker.