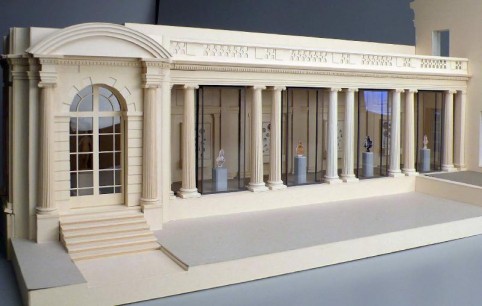 Presentation of sculpture and selections from an important

On 13 December, visitors to the Frick Collection will be able to enjoy a new gallery-the first major addition to the museum's display spaces in nearly 35 years. The inspiration for this initiative, which involves the enclosure of the portico in the Fifth Avenue Garden, comes from the intention of museum founder Henry Clay Frick (1849–1919) to build an addition to his 1914 mansion for his growing collection of sculpture. The project was postponed in 1917 following the United States entry into the First World War and Mr Frick died before it could be resumed.

In recent years, the institution has placed greater focus on sculpture through critically acclaimed exhibitions and several key acquisitions, while also evaluating the effectiveness of the display and lighting of such objects. Another area of increased attention has been the decorative arts. When talks began with renowned porcelain collector Henry H. Arnhold about a promised gift, the idea to create a gallery both for sculpture and the decorative arts was revisited.

The architecture firm Davis Brody Bond developed a plan to integrate the outdoor garden portico into the fabric of the museum, and groundbreaking occurred last winter. Davis Brody Bond is one of the leading practices in the United States engaged in a range of museum and landmark structure commissions. The firm's cultural portfolio includes the National September 11 Memorial Museum, the Smithsonian Institution's National Museum of African American History and Culture, and over 20 years of restoration and expansion work at the New York Public Library.

The Portico Gallery for Decorative Arts and Sculpture opens in mid-December with an inaugural exhibition of works drawn from Henry Arnhold's promised gift of 131 examples of Meissen porcelain from the early years of this Royal Manufactory's production. On view through 29 April 2012, ‘White Gold: Highlights from the Arnhold Collection of Meissen Porcelain’ will feature approximately 70 of these objects, presented along with a group of 18th-century sculptures by Jean-Antoine Houdon (1740–1828). Among the latter works is the full-length terracotta Diana the Huntress, a signature work at the Frick that returns to view having been recently cleaned and treated. It finds a permanent home in the new Portico Gallery, while the display of other sculptures and ceramics will rotate periodically.

Comments Director Ian Wardropper, ‘With the opening of the new Portico Gallery, we fulfil a wishexpressed by Henry Clay Frick nearly 95 years ago concerning the display of sculpture. It will become the permanent home of Houdon's Diana the Huntress while offering additional space for the presentation of decorative arts objects. Appropriately, our inaugural exhibition previews the generous promised gift of Henry Arnhold, whose family collection of Meissen will complement beautifully our holdings in French and Asian porcelains and whose foundation underwrote the costs of construction. The light-filled, enclosed portico also offers an enchanting new vista of Henry Clay Frick's private garden, and we very much look forward to sharing all of these attributes with the public.’