A labyrinthine exploration of the human life cycle 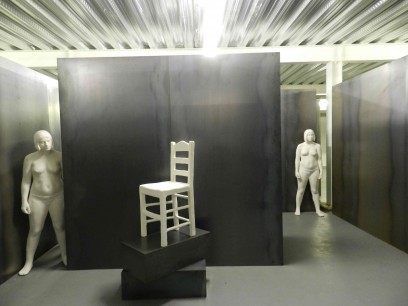 Rosalind Ormiston visits ‘NUDE’, a spectacular installation on display in London only until 22 January

On display for a limited period ‘NUDE’ is an interactive sculpture installation created by the prize-winning artist Eva Caridi, making her debut in London after shows in Paris, New York and Sao Paulo. The exhibition is curated by Francesca Nannini and takes place in AmbikaP3, created from the gargantuan space of the old Engineering halls of the University of Westminster. Caridi’s NUDE incorporates a plethora of human figure sculptures, film and sound installations, and photography, all set within two monolithic iron labyrinths, to explore the human condition through the labyrinth of the mind.

Walking along the narrow pathways of the black-walled labyrinth, one arrives at the core of the maze, and a b/w video installation. Directed by Caridi, the short film, about five minutes in length, portrays three ages in a life cycle. Three females – a child and a young woman, both semi-naked, and an older woman – wander separately through a derelict building, along the same path, appearing from and disappearing into unseen rooms and corridors that run off camera. At times the three stare out toward the spectator, engaging the viewer in this dream-like film sequence. The chilling sound installation, a loud cacophony of cries, overhead noises, falling water, footsteps and the spoken word, spills out across the vast installation – the largest iron sculpture to be exhibited in London - to focus the mind of the spectator on Caridi’s attempt to create awareness of how the passage of time affects the human condition.

Beyond the video installation viewed in a small darkened room space, the exit leads into the light and on to Caridi’s second labyrinth, this one filled with her plaster cast sculptures, 20 life-size statues of near-nude young women (using the same model), each sculpture ‘grasping at life, desperate to capture a moment in time, to catch small instants that slip from their hands by freezing themselves into multiple body positions’. Caridi’s intention is to mirror the human soul, and ‘the frailness of human emotions’. The sculptures are placed at intersections and in semi-enclosed spaces – small open rooms – within the iron labyrinth. As one weaves and turns through the maze of corridors, much as do the three females in the video installation, the sculptures take on new forms viewed from different angles. In this labyrinth the visitor can change direction to take a new path or retrace steps, a possible reference to how one can retrace or choose a different path in life. At the heart of this labyrinth, set on a plinth, is an empty chair waiting to be filled. And, at its exit, on a blank wall running the length of the maze are hung  15 photographic prints; separate studies of the women in the video installation.

Caridi explains that the inspiration for ‘NUDE’ emerged from a previous work, her film trilogy Intimate Portrait. In ‘NUDE’, which, Caridi says is ‘a whole self-portrait’, she states that it ‘almost sums up a little bit of my life, it is in fact autobiographical’, and is a continuity of Intimate Portrait. ‘It has everything to do with time and the human condition, it relates to previous work but is separate to it’ she says.

The installation, designed by Eva Caridi, is vast. It unfolds over a surface of 14,000 square feet with metal walls engineered by the Midlands company S&W Ltd, taking 1,200 man hours to manufacture the labyrinth and 400 hours to install it. Most of the work is hands-on production by Caridi. ‘I made the sculptures without intervention from others, and also the direction of the film and photography’. It is mainly for technical details that Caridi uses others to aid her; she worked alongside her music composer Ioannis Andriotis and photographer and filmmaker Nikos Chrisikakis, who are acknowledged in the exhibition catalogue. The ‘NUDE’ video was filmed in Caridi’s homeland of Corfu. She chose the derelict Old English Hospital as her location, to create an imagined labyrinth of the mind from the maze of corridors, arches and pathways in the building complex. Above an arch that features in her film the words in Greek read ‘Freedom is the most expensive thing for human beings’, which Caridi feels is apt for the film. She states that many archways throughout the old hospital building each have a different thought-provoking sentence, all original to the building.

In this installation her aim is to ‘accompany the spectator with an invisible hand through her iron-walled world, pushing them towards the end to get the true gist of her work’. To make the point she quotes Leonardo da Vinci, ‘the noblest pleasure is the joy of understanding’, and it is left to the spectators to take from the work their own understanding of it. Caridi believes that ‘Art has to relate to the public. I feel that we don’t have enough time for ourselves. We need to take time for introspection... to think on our past, present and future’.

The phenomenal size and intricacies of this work make one wonder what is next for Eva Caridi. She responds immediately, ‘my next project will be all around puzzles, mazes, [it will be] very architectural, because I am fascinated by geometrical spaces and site-specific installations [and] possibly of the same size as NUDE’. Whilst Caridi ponders on her next work, catch NUDE if you can. It is a spectacular body of work, which will provoke discussion and admiration of Eva Caridi.

For other shows on around the world right now - Click here