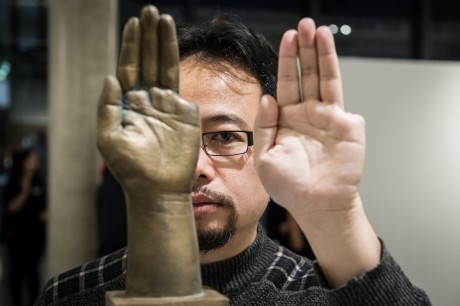 Chinese contemporary artist Sheng Qi, in his first solo exhibition in London, at the Hua Gallery, brings together a series of new paintings which focus on the Post-Mao period of his country’s history. In the ‘Mao Series’ of paintings the vast silhouette of Chairman Mao looms large and contrasts in size to the crowds of tiny people who surround him. The‘Fan Series’ of portraits features political leaders, business men and famous actors. The significance of his portrayals of Den Xiaoping, the leader of economic reforms from 1979, or Wen Jiabao, the current Prime Minister, or film actor Jackie Chan amongst other high-profile figures, is to highlight those who have had or continue to have a strong relationship with the economic development of China.

In addition to new paintings, the artist displays his sculpture My Left Hand, 2004, a result of his personal response to the Tiananmen Square uprising in June 1989. In an act of personal defiance and self-mutilation, Qi cut off the little finger of his left hand and buried it. He created a cast of his mutilated hand and produced a limited edition series in bronze; 7/9 in the series is on display. Sheng Qi left China in 1989 after the Tiananmen Square protest; he has many works in public collections, including MoMa, and the Metropolitan Museum, New York.