Portrait that ended a marriage acquired by Ashmolean 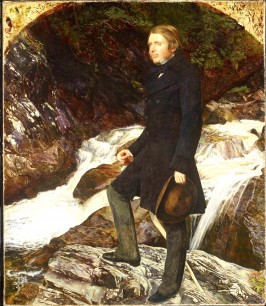 The Ashmolean in Oxford, UK has announced the acquisition of one of the most important Pre-Raphaelite paintings remaining in private ownership – the celebrated portrait of John Ruskin by John Everett Millais.  The picture, which was recently exhibited in Tate’s major exhibition, Pre-Raphaelites: Victorian Avant-Garde, has been on loan to the Ashmolean since January 2012.  It has been allocated to the Ashmolean by the Arts Council England under the Acceptance in Lieu of Inheritance Tax (AIL) scheme

The portrait was started in the summer of 1853 while the artist, sitter, and Ruskin’s wife were staying in Glen Finglas, a remote area of the Trossachs north of Glasgow. It was during this holiday that Millais fell in love with Effie Ruskin, setting in motion the events that would break the Ruskins’ marriage, Millais’s friendship with Ruskin, and the artist’s engagement with the Pre-Raphaelite movement.  Finishing the picture was to become, for Millais, ‘the most hateful task I have ever had to perform’.

The portrait was commissioned by John Ruskin on behalf of his father, John James. Ruskin hoped that in this work he would be able to oversee Millais’s artistic development.  In accordance with the true principles of Pre-Raphaelitism, Ruskin insisted that the landscape should be painted on the spot, in spite of bad weather and swarms of midges. He told his father that:

Millais has fixed on this place, a lovely piece of worn rock, with foaming water and weeds, and moss, and a noble overhanging bank of dark crag, and I am to be standing looking quietly down the stream, just the sort of thing I used to do for hours together …. We shall have the two most wonderful torrents in the world, Turner’s St Gothard and Millais’s Glenfinlas.

Ruskin saw Millais as the heir in landscape painting to his great hero, J.M.W. Turner, who died in 1851. Earlier in that year, he had jumped to the defence of Millais and the Pre-Raphaelite Brotherhood in two famous letters to The Times.  Two of the paintings he praised are now in the Ashmolean: Charles Allston Collins’s Convent Thoughts; and Millais’s own Return of the Dove to the Ark. Ruskin had high expectations for the portrait, which he declared ‘will make a revolution in landscape painting’.

The Ruskins’ marriage was annulled in July 1854 on the grounds that the marriage had not been consummated and a year later Millais married Effie.  The portrait was not exhibited at the Royal Academy in 1854, as had no doubt been expected when it was begun, and Ruskin must always have had mixed feelings about it. In 1871, he gave it to his closest friend in Oxford, Henry Wentworth Acland, later Regius Professor of Medicine, who had been present in Scotland when the picture was begun. It hung in his house in Oxford, and remained in the family until sold by his descendants for a record price at Christie’s in 1965, where it was bought by the late owner.

We are hugely grateful to the Arts Council for their support in allocating this extraordinary picture to the Ashmolean.  The portrait is of supreme importance for the study of 19th-century British art and it will be shown with the Museum’s world-renowned Pre-Raphaelite collection.

It’s wonderful that such a celebrated portrait is now on permanent public display at the Ashmolean Museum. This was one of the finest pieces at the Tate’s sell-out exhibition on the Pre-Raphaelites, and can now be admired by even more people.

Acceptance in Lieu is an important part of the Arts Council’s work. Thanks to this scheme, unique cultural objects which for years may have been glimpsed only in textbooks are once again being displayed for everyone to enjoy