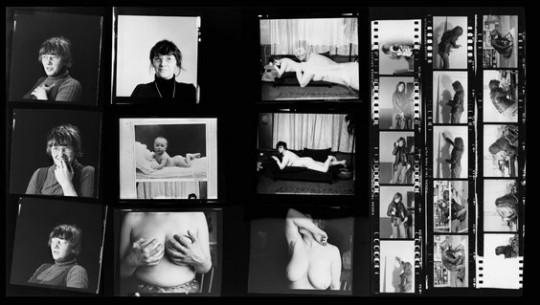 Richard Saltoun Gallery will be exhibiting works by Alexis Hunter (b.1948) and Jo Spence (1934–92), two pioneering artists whose radical works from the 1970s and '80s brought new rigour to photographic portraiture. Using the camera as an instrument of democratic action, and the body as an emphatically political site, both artists embraced role-play, storytelling and re-enactment to scrutinize female subjectivity playfully  – innovations that would decisively influence the artistic strategies of future generations.

Hunter will display hand-coloured xeroxes from the late '60s and a very early instance of colour xerox, Perceptions in Times of Crisis (1977), depicting a woman in the act of suicide, which was originally shown the same year it was made at the ICA. Starting out as a painter and working across media – from 36mm slide to colour xerox on a role of cartridge paper, for instance; or collaging, colouring and captioning newsprint – Hunter blurred distinctions, literally handling the photographic image as a way of exerting control of perceptions and examining gender stereotypes.

For Spence, photographic empowerment went further still, capable not only of effecting issues of class, power and gender, but even, poignantly, of health; and from this perspective she fought against all forms of domination. The exhibition presents a selection of her Phototherapy works, photographs that assumed an important aspect of her battle with breast cancer through the 1980s. These images staged for the camera the personal trauma she was living through, offering a way to reframe memory and reclaim her body from the machinery of modern medicine.

Spence considered her work to be 'cultural sniping', revealing the broader reach of what at first seems unsettlingly private. Her photographs flew in the face of all the givens in art, utilizing the aesthetic of the amateur snapshot, focusing on process rather than product and placing her own unconventional physique centre-stage. Their raw autobiographical reckoning and refusal to conceal weakness paved the way for works over a decade later by Jenny Saville, Gillian Wearing and Tracey Emin.

This is the first solo presentation of Hunter's works since her exhibition at Norwich Gallery in 2006 and follows Spence's major retrospective at SPACE and Studio Voltaire in London last year.  The exhibition has been curated by George Vasey and will be accompanied by a catalogue with commissioned writing from Beth Bramich, Nina Wakeford and Louisa Lee exploring the influence of Alexis Hunter and Jo Spence to a current generation of artists, writers and academics. There will be a screening on 26 September alongside the exhibition to coincide with the Fitzrovia Late in September.

Curator: George Vasey (b. 1981, Newcastle upon Tyne, UK) is a curator and writer based in London. Recent projects include ‘A Small Hiccup’(Grand Union, Birmingham, The Newbridge Project Newcastle & Limoncello London (2013).