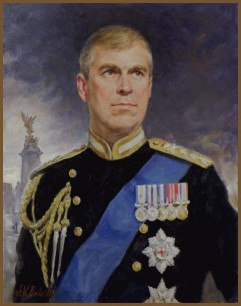 The SSMAC Club of New York held its 17th Annual Military Ball on Friday, 4 October at the Hotel Pierre, where it honoured HRH Prince Andrew, the Duke of York, with his portrait painted by Igor Babailov, Hon. RAA. The artist officially unveiled his portrait of Prince Andrew, which was commissioned by the SSMAC, and slated for the collection of Buckingham Palace in London.

At this year’s event, the United States Navy and the Royal Navy were honoured. Members of the military, veterans and supporters annually attended this event to pay tribute to the brave men and women who have served their country.

The portrait of Pope Benedict XVI was selected by the Pope for the Vatican Splendors international museum tour. Babailov was the only living artist in the exhibition, as his papal portrait hung alongside the works of Michelangelo, Bernini, Giotto and other Masters of the Renaissance.

Having painted his first portrait at the age of four, Igor Babailov began his formal classical art training at nine, studying with leading Masters of traditional painting and drawing. Over 16 years (1974–1990) Babailov attained the highest level of fine art education and received the doctoral equivalent, Master of Fine Arts degree under the Russian Academy of Arts (est.1757), which taught and gave the world many outstanding Masters of portraiture, including Repin, Serov and American artist, James A. McNeill Whistler.

A recipient of national and international awards and honours, Babailov is an advocate for the historic academic tradition of portrait painting. He has taught at the Florence Academy of Art in Italy. He maintains his mid-south portrait studio in the USA andtravels extensively to his clients' locations in the USA and around the world.

Babailov is a member of the National Arts Club in New York City and a member of the Russian Nobility Association in America. He is also active in charity works, especially those for Children’s causes. The International Academy of Culture and Art recently awarded him the Order ‘For Service to Art’ (The Golden Star).For more information about the artist, please visit the artist’s website at www.babailov.com

SSMAC Club, which has served more than 5,000,000 members of the armed forces since 1919, also paid tribute to Admiral Jonathan W. Greenert, Chief of Naval Operations, United States Navy and ABC news correspondent Bob Woodruff. Each year the SSMAC salutes a branch of the United States military.

For more information about the SSMAC Club, please visit www.ssmaclub.org.