So much more to Robert Indiana than 'Love' 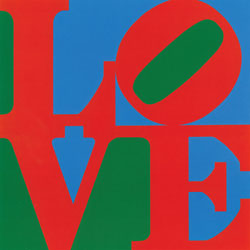 'Robert Indiana – Beyond Love' on now until 5 January  2014 at Whitney Museum of American Art, New York

Emerging at the time of Pop art in the early 1960s, Robert Indiana embraced the vocabulary of commonplace highway signs and roadside entertainments. He used words to explore themes of American identity, racial injustice, and the illusion and disillusion of love. The appearance in 1966 of his signature image, LOVE, and its proliferation on unauthorized products, eclipsed the poignant complexity of his art. This retrospective reveals an artist whose work addresses fundamental issues facing humanity – love, death, sin, and forgiveness – giving new meaning to our understanding of the ambiguities of the American Dream and the plight of the individual in a pluralistic society.

The New York Times has described this show as  ‘Shockingly exciting . . . a revelation’