Declaring a 'Republic of the Moon' 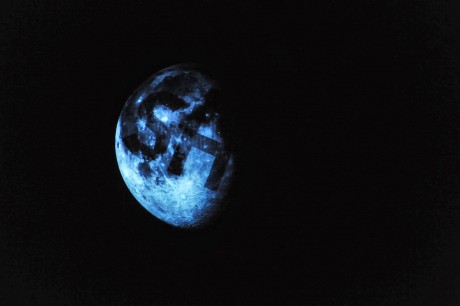 It's nearly four decades since human beings walked on the Moon, but it now seems likely that we will return there in this century – whether to mine for its minerals, as a ‘stepping stone’ to Mars, or simply to do scientific research. In a provocative pre-emptive action, a group of artists are declaring a Republic of the Moon here on Earth, to re-examine our relationship with our planet’s only natural satellite. (See our full review in January's Cassone)

Marking the start of its 20th anniversary year, the experimental art and science organization, The Arts Catalyst, will animate the Bargehouse exhibition with performances, workshops, music, talks, a pop-up moon shop by super/collider andplayful protests against lunar exploitation.  A manifesto declaring the Moon a temporary autonomous zone, with responses from artists and scientists to novelist Tony White’s call to ‘occupy the Moon!’ will be published in print and e-Book formats to coincide with the exhibition.

Liliane Lijn’s moonmeme explores the repeating cycle of the Moon’s phases, projecting the word SHE onto the lunar surface so that the letters slowly emerge and then disappear as it wanes. Since lunar projection is so challenging technically, Lijn has worked with an astronomer to present a real-time animation of the projection accompanied by a sound work and by quotations from sources including Pliny and the Talmud to illustrate the profound connections between the Moon and the feminine principal of transformation and renewal. The Mayor of London will announce a decision on Lijn’s shortlisted proposal for London’s Fourth Plinth early in 2014.

Agnes Meyer-Brandis’ poetic-scientific investigations weave together fact, imagination, storytelling and myth, from past, present and future. In Moon Goose Analogue: Lunar Migration Bird Facility, the artist develops a narrative based on the book The Man in the Moone, published by English bishop Francis Godwin in 1638, in which the protagonist flies to the Moon in a chariot towed by ‘moon geese’. Meyer-Brandis has raised eleven moon geese from birth in Italy, giving them astronauts’ names, imprinting them on herself as goose-mother, training them to fly and taking them on expeditions. The artist will build a remote Moon analogue habitat for the geese, which will be operated from a control room within the gallery. Moon Goose Analogue: Luna Bird Migration Facility, the documentary film of this project was Ars Electronica award of distinction winner 2012.

Katie PatersonSecond Moon and Earth–Moon–Earth.  Second Moon is Paterson's current project tracking the cyclical journey of a small fragment of the Moon as it circles the Earth, via airfreight courier on a commercial orbit.  Second Moon is making an anticlockwise journey; orbiting at approximately twice the speed of our Moon, it will orbit Earth about 30 times in one year.  The journey can also be followed on a free App. Earth–Moon–Earth (Moonlight Sonata Reflected from the Surface of the Moon)involved using a form of radio transmission whereby messages are sent in Morse code, from earth, reflected from the surface of the moon and then received back on earth. The moon reflects only part of the information back – some is absorbed in its shadows, ‘lost’ in its craters. For this work Paterson has translated Beethoven's Moonlight Sonata into Morse code and sent it to the moon via Earth-Moon-Earth (EME). Returning to earth fragmented by the moon's surface, it has been re-translated into a new score, the gaps and absences becoming intervals and rests. In the exhibition the moon-altered score is performed on a self-playing grand piano.

Leonid Tishkov’sPrivate Moon tells the story of a man who met the Moon and stayed with her for the rest of his life. In a series of intimate photographs, the artist pairs images of his private moon with verse which describes how the Moon helps us to overcome our loneliness in the universe by uniting us around it. Tishkov and his illuminated moon have travelled the world for almost ten years. He has a dream to fly with her to the Moon.

WE COLONISED THE MOON (Sue Corke and Hagen Betzwieser) will be the Republic of the Moon’s artists in residence throughout the exhibition, creating work and running talks and workshops. Corke and Betzwieser’s graphic art and installation projects embody a child-like wonder at the universe. Employing a range of DIY production techniques, their partnership is rooted in absurdism and theatrical performance characterized by slogans and catchphrases. At the Bargehouse, they will be coordinating protests against the exploitation of the Moon and working with scientists to help us look afresh at our closest celestial neighbour.

Moon Vehicle (Joanna Griffin and ISRO scientist P Shreekumar)a presentation of a project devised by the students at Srishti School of Art, Design and Technology in Bangalore, India, with artist Joanna Griffin. Its focus was to reclaim a cultural connection with the Indian Chandrayaan space programme challenging the now-dominant scientific narrative of the Moon and reasserting other imaginaries inspired by Indian narratives of self-determination and agency.

The artists in Republic of the Moon regard the Moon not as a resource to be exploited but as a heavenly body that belongs to us all. The exhibition asks: Who will be the first colonizers of the Moon? Perhaps it should be the artists.

A Manifesto for the Republic of the Moon will be published to accompany the exhibition, edited by curator, Rob La Frenais, it will be available in print, .epub and .mobi formats.

Republic of the Moon is a touring exhibition commissioned by Arts Catalyst and FACT. It was first presented by FACT in Liverpool. It has been made possible with Grants for the Arts support from the Arts Council England and Science & Technology Facilities Council.

Read our review of this exhibition in January's Cassone

A full programme of events and ticket bookings can be found at www.artscatalyst.org/moon