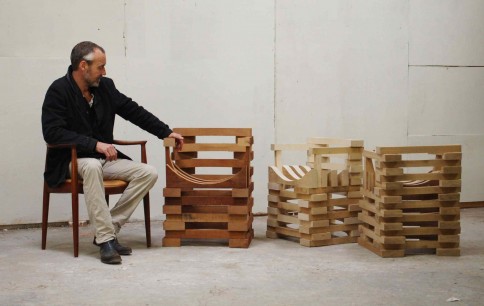 The Art Museum in Tønder, Denmark

On 5 April in 2014, Danish furniture designer Hans J. Wegner would have turned 100 years old. The Art Museum in Tønder will celebrate this birthday by putting on an exhibition and publishing a book which focuses on Hans J. Wegner’s relationship to his hometown of Tønder and his overall importance to Nordic design.

The only permanent Wegner exhibition in Denmark is on show at the old Water Tower in Tønder. The chairs here were all donated to the museum by Wegner himself. They are, as he put it: ‘My 37 best chairs’. The reason behind this donation was that Wegner wanted somehow to return to his home town – the town that had given him his education as a furniture maker and developed his design talent.

Hans J. Wegner was born in the town of Tønder in 1914. The exhibition of his life and work will cover more than 700 square metres at the museum. It includes over 150 pieces of furniture, lamps, art works, tools and other objects which illustrate the story of Wegner’s relationship to Tønder both in his youth and in his old age.

The museum show covers the story of Wegner’s life, starting with his childhood growing up in his father’s cobbler workshop. It also describes Wegner’s artistic period as a youth, which resulted in drawings, paintings and sculptures. The exhibition also focuses on Wegner’s education as a furniture maker in the workshop of Herman Stahlberg and shows why the Water Tower in Tønder eventually became a museum showcase for Wegner’s best chairs. Finally, the exhibition shows how Wegner became known as one of the most famous of Scandinavian designers.

The Art Museum in Tønder is a prize-winning museum for Nordic art and design. One of its main focus areas is to describe the major role that Wegner played in the history of Nordic design especially in terms of Nordic design’s ‘golden age’ during the 1950s and 1960s. The Museum’s exhibition also focuses on the significant role that Wegner played historically and the role that he still plays today in defining the very term, brand and quality that are the hall marks of ‘Scandinavian design’.

What really defines Wegner as a furniture designer is his deep understanding of the nature of wood as a material for design. While making a piece of furniture Wegner showed respect both for the nature of the craftsman’s hand as well as how a design object is formed by the machine. This is the basic principle of Wegner’s design, which has left its indelible mark on the furniture design legacy which Denmark has been so fortunate to inherit.

This legacy goes back to the Danish tradition of furniture making, admired throughout the world. The legacy of Wegner and his designer colleagues is the reason why Danish and other Nordic designers are still known for their excellent craftsmanship in design and handling of wood in furniture design. As he said:

Love of wood is something that all mankind has in common. Regardless of where people come from, they cannot stop themselves from letting their hands stroke a piece of wood, hold it, sniff, and experience that material.

Art Museum in Tønder has invited five contemporary Nordic designers to relate their own design process to Wegner in some way and create totally new design pieces. By doing so they shed an important light on the legacy of Wegner’s design in a contemporary context. The five designers are: David Ericsson from Sweden, Caroline Olsson from Norway, Harri Koskinen from Finland, Dögg Gudmundsdottir from Iceland and Søren Ulrik Petersen from Denmark.

The Art Museum in Tønder is also publishing a 380 page book in connection with the exhibition. The book includes articles about Wegner’s upbringing in Tønder written by cultural historian Elsemarie Dam-Jensen. There is also an article about Wegner’s furniture design from 1938–49, written by art and design historian Kirsten Hegner. Wegner’s importance in the context of Nordic Design history is written by curator of art and design Anne Blond. Finally there is an article concerning the  reception of Wegner’s design and Nordic design abroad, especially in Britain, written by fellow at Cambridge University, Barry Phipps. The book also contains analyses of each of Wegner’s 36 chairs in the Water Tower of Tønder. The book contains three special ‘case‘ studies in which Wegner took part. There is also a discussion with the five contemporary Nordic designers and their views on Wegner and Nordic design in general. There are interviews with Wegner’s two daughters and the furniture makers, Bernt, Ejnar Pedersen and Henry Fisker, who are the only craftsmen alive today who actually worked closely with Wegner.

The book will be published in Danish on 5 April and in English during the summer of 2014.