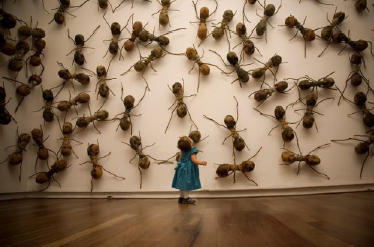 The Saatchi Gallery’s new show ‘Pangaea: New Art From Africa and Latin America’ takes its title from the prehistoric landmass that once conjoined Africa and America. This major survey reunites the two former sister continents by bringing together the work of 16 of their contemporary artists.

The exhibition celebrates and explores the parallels between their distinctly diverse cultures and creative practices, as they begin to receive recognition in the increasingly globalized art world.

In Europe and the USA, art has typically changed through a constant renewal of innovative ideas and movements. There is now an important global shift as artists seek inspiration by exploring new art in regions outside their immediate geographical and historic context.

The desire by artists and their audiences to discover fresh influences from a broader body of work has inspired the recent preoccupation of museums to broaden their Eurocentric collections.

Against this backdrop, the artists in ‘Pangaea: New Art from Africa And Latin America’, respond to present day complexities in diverse and innovative ways. Years of colonial rule, rapid urban expansion, migration and political and economic unrest remain subjects for many of the artists, whose reflections on the richness of their environment translate into an intense visual experience.

Rafael Gómezbarros’ Casa Tomada has taken over the facade of numerous national monuments. The giant ants (see image above) address issues of diaspora and internal displacement suffered in Colombia for several decades because of the armed conflict wreaking havoc on the country.

Antonio Malta Campos’ paintings emerge from a single pattern that organically grows over time and gives way to recognizable forms and a perceived narrative.

Vincent Michea’s paintings are inspired by the architecture and population of his hometown Dakar, Senegal’s largest city with a constantly changing landscape.

Aboudia’s large canvases are occupied by a multitude of characters displaying menacing weapons, and are a record of the sudden escalation of violence following electoral chaos in the city of Abidjan in 2011.

While a few artists from Africa and Latin America have gained international acclaim, a vast number remain relatively unknown. The full scope of work on display in this exhibition, which includes new painting, photography, installation and sculpture, encapsulates this sense of diversity – a bubbling energy surfacing in the two great continents that were once Pangaea.