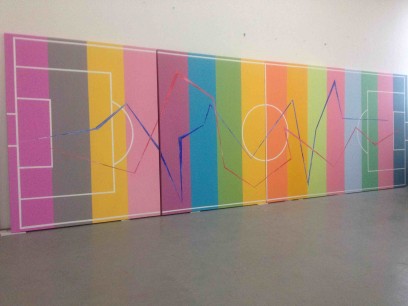 China comes to the National Football Museum in Manchester

The National Football Museum is taking part in the largest exhibition of Chinese contemporary art ever staged in the UK.  In partnership with the Centre for Chinese Contemporary Art (CFCCA), ‘Harmonious Society’ featuring five thought provoking  and surprising works of art, opens  at the award-winning museum on 27 September and runs till 23 November. Altogether, the work of 30 artists will be shown across six venues in Manchester

One of the exhibits at the National Football Museum has been created especially for the exhibition: ‘The Ideal Field for the Perfect Battle’ by Jin Feng features grass seeds collected from across the country to create the ideal football pitch. Will the seeds grow together or will conflict occur?

Another work, ‘Tactics’ by Chen Wenbo, mimics the length of a real football pitch, complete with line markings illustrating a game of strategy. Viewers will be able to walk 360 degrees around the installation that is folded like a Chinese screen.

Other artworks include an intriguing installation of 14 porcelain boxing gloves suspended at different heights; a video triptych of businessmen forging deals on the golf course and a recreation of one of China’s greatest landmarks.

Kevin Moore, Director of the National Football Museum said: We are proud and delighted to be at the heart of this exciting new exhibition of Chinese contemporary art, a key strand of Asia Triennial Manchester 2014.  We are showing works never seen before in this country; we hope that this will attract new visitors to the museum and that our existing visitors will be intrigued by what they see.

The National Football Museum is one of six venues taking part; others include the Centre for Chinese Contemporary Art, ArtWork, The John Rylands Library, Manchester Cathedral and theMuseum of Science & Industry.

The full list of artworks at the National Football Museum is as follows.

Chen Wenbo
Tactics, 2014
Consisting of four double-sided, two metre panels, Tactics mimics the length of a real football pitch, complete with line markings illustrating a game of strategy. Viewers will be able to walk 360 degrees around the installation which is folded like a Chinese screen, and get a sense of the dynamism in Chen Wenbo’s use of colour and form.

Kan Xuan
Man with Balls, 2005
In a global corporate culture of businessmen making deals, Kan Xuan presents a three screen video work depicting a man practicing his golf swing under the cover of night. This work makes an astute comment on a society where sport is used to entertain clients and forge business relationships.

Liu Jianhua
Boxing Time, 2002
Visitors are confronted with a fragile installation of fourteen individual porcelain boxing gloves suspended at different heights. Tension is rife: hung in pairs as if on opposite sides of a boxing ring, each glove has an inscription on the sleeve of a country’s name in its native language.

TOF Group
The Ideal Field for the Perfect Battle, 2014
Grass seeds have been collected from all across the UK to create the ideal football pitch. Visitors can view this otherwise competitive platform and imagine the two sided conflicts which might occur on a utopian battleground.  Yang Zhenzhong Long live the great union, 2013

Tiananmen is no longer unique in China with many imitations built by local governments across the country that do not have the original sense of imperial dignity or the revolutionary significance of 1949, but rather act merely as theatrical sets and tourist attractions. Long live the great union plays on this idea as the architecture of Tiananmen is fractured into 9 separate pieces. As the viewer moves around the work they catch glimpses of parts of the building and it is only from one viewpoint that all the pieces align and Tiananmen is again 'reassembled' into one complete building.

'Harmonious Society' is a key strand of Asia Triennial Manchester 2014 (ATM14).  It is the largest exhibition of Chinese Contemporary Art in the UK to date featuring all new commissions or UK premieres.