Robert Colquhoun and Robert Macbryde  get the show they deserve 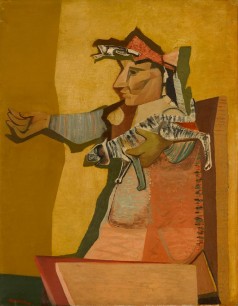 A major new exhibition at the Scottish National Gallery of Modern Art this autumn will explore the remarkable work of Robert MacBryde and Robert Colquhoun. Two of Scotland’s finest 20th-century artists, their careers rose meteorically in the 1940s when they took the London art-world by storm, but were tragically cut short by an equally dramatic decline in their fortunes, and a subsequent spiral into alcoholism, which ended with their early deaths in the 1960s.

Colquhoun and MacBryde met in 1933 at the Glasgow School of Art, where they were the stars of their generation, marked out from their contemporaries both by their prodigious talent, and the intensity and self-sufficiency of their relationship; they become lovers and worked in close partnership for the rest of their lives. The Two Roberts will be the first major retrospective exhibition devoted to their work, and marks their centenary year.

Both artists came from working-class Ayrshire backgrounds: MacBryde was born in Maybole in December 1913 and Colquhoun in Kilmarnock in December 1914.  In 1941 they moved to London, where they quickly became part of the celebrated Soho set that included artists such as Francis Bacon, Lucian Freud, Keith Vaughan and John Craxton, and the poets Dylan Thomas and George Barker.  Initially attracted to the Neo-Romantic painting style of Graham Sutherland and Paul Nash, by 1945 they had rejected the movement's gentle, pastoral imagery for something altogether bleaker and harder, much influenced by Picasso’s latest work.  Colquhoun specialized in figure painting, MacBryde in still-life.

The Roberts were taken on by the Lefevre Gallery on Bond Street, one of the leading modern art galleries in Britain, where they had a string of successful exhibitions, selling their work to some of the wealthiest collectors of the day.  Institutions such as the British Council, the Contemporary Art Society and the Museum of Modern Art in New York also acquired paintings and by the early 1950s Colquhoun and MacBryde were among the most famous artists working in Britain.

The studio they shared at Bedford Gardens in Notting Hill was a magnet for the younger generation of artists and poets, a bohemian circle which, thanks to many colourful memoirs of the period, has become legendary for its socializing.  Hard drinking, volatile and uncompromising, Colquhoun and MacBryde figure prominently in these accounts, and their lives, which were as passionate and compelling as their art, have at times threatened to overshadow their work.

In 1951, the Roberts suffered a blow when they were obliged to move out of their studio, finding a temporary home at Tilty Mill, a ramshackle farmhouse in the Essex countryside, where they were engaged to look after the four children of their friends George Barker and Elizabeth Smart.  Though they enjoyed success at the end of that year with their designs for a new ballet at the Royal Opera House, Colquhoun’s most recent exhibition at the Lefevre Gallery had received indifferent reviews, and the tide of fashion was beginning to shift in favour of abstract art, ‘Kitchen Sink’ painting and the group of artists centred on St Ives.

The Roberts had also lost Duncan MacDonald, their champion at the Lefevre, who died in 1949, and their exhibitions at the gallery slowed to a trickle.  As a result, their sales plummeted, and with their popularity waning and their drinking on the rise they were caught in a downward spiral. Colquhoun in particular became demoralized and depressed, but neither artist painted much in the mid-1950s. By the end of the decade Colquhoun and MacBryde, whose austere and uneasy paintings so perfectly encapsulate the mood of post-war years, were begging friends for money and sleeping on sofas. Colquhoun died in 1962 at the age of forty-seven, and MacBryde died four years later, aged fifty-three.

This long-awaited exhibition will chart the career of both artists from their days at Glasgow School of Art to the final series of monotype prints on which Colquhoun was working when he collapsed and died.

The Roberts were huge, remarkable characters, and the Scottish National Gallery of Modern Art argues that they were also artists of the first rank. Collected by the leading patrons of the day, they had the art-world at their feet. They could be loving, generous and supportive, but also irascible and combative, attracting and alienating people at the same time. Their work has long been consigned to the museum stores, while their lives have been caricatured in the extreme. This exhibition, which includes over 60 paintings, 70 drawings and monotypes, and a vast array of photographs and archival material, is intended to re-establish them as major forces in post-war British art.

If you have not yet subscribed to Cassone and would like to try the magazine free for one week, please go to our Registration page and follow the instructions online, using our CASSTRY voucher code instead of paying.