Getting into Gear at Stow-on-the-Wold 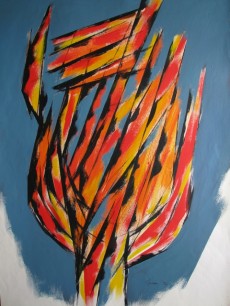 William Gear's son David has been very involved in the planning of the exhibition. The works have been very carefully chosen and have never been seen by the public before. This exhibition is devoted to his herculean output of works on paper, the third in a trilogy at The Fosse Gallery, following those which concentrated on the periods 1966 –96 (2011) and 1945 –65 (2012).

The current show of 48 abstract compositions sampled from across half a century is, of course, capable of giving only a glimpse into a huge and richly varied oeuvre. Many of the abstracted elements found in these works are ultimately derived from the observable world. William Gear spent his early years, in the 1920s, in the mining village of East Wemyss on the Fife coast, where some local sights of daily familiarity became indelibly lodged in his impressionable boyhood memory. These included the massive and imposing twin pit heads of the Michael Colliery where his father Porteous worked, echoed in Study (1968) and Black Trap No 1 (1990), the thundering surf of winter storms pounding the coal waste blackened beach, and the beckoning caves punctuating the low red cliffs surmounted by the stark and forlorn ruins of Macduff Castle.

A feature that impinged strongly was his short-cut to school  – the towing verticality inherent in a copse of local trees, perhaps re-imagined in such works as Black-Green Verticals (1953) and Black Verticals (1974). Gear seized the opportunity to attend Edinburgh College of Art (1932 –7), which helped shape his future course studying under William Giles, John Maxwell and McTaggart. It was about this time that other imagery contributed to the mental reservoir which helped form the source for his artistic imagination, mostly notably the massive grid-like structures of the Forth Railway Bridge  – crossed regularly on journeys between Fife and Edinburgh including Linear Study (1948) and Fine Structure on Green (1953).

Gear went on to win a travelling scholarship to Paris where he studied at the Académie Colarossi under Fernand Léger. On the strength of his scholarship he travelled to Italy, Greece and the Balkans, and the gleaming tessarae of Ravenna's   byzantine mosaics contribute to Jostling Shards (1975). Although Surrealism was all the rage in Paris at that time with large exhibitions of Dali   and Magritte,   Léger would not tolerate any of it amongst his students. Léger's approach to Gear's art, as much as its content, was to become a self-acknowledged life-long influence on the young Scot.

The Second World War disrupted these formative years and by 1940 Gear had joined the Royal Corps of Signals. Following the war, the years of Gear's second Parisian sojourn (1947–50) were to play a strong pivotal role in his development, when he became absorbed by the continental artistic maelstroms  – rubbing shoulders with many of the leading Ecole de Paris artists, and being recruited into the north European avant-garde CoBrA group (1948 –51) through the auspices of Constant Nieuwenhuys, Asger Jorn and Corneille Beverloo. Yet it was simultaneously a time of relatively grim post-war privations, the austere zeitgeist of which seems to be evoked in such monochrome sketches as Barrier 1949.

The same year he heard from the Betty Parsons Gallery in New York that he was to co-exhibit with an American artist, whose name and work were unfamiliar to him  – Jackson Pollock. In 1950, and now with his American wife Charlotte and baby David in tow, he 'emigrated' from his attic studio overlooking Notre Dame Cathedral to a rural Buckinghamshire cottage. The contrasting bucolic surroundings of the rolling Chilterns, with its patchwork of fields, woods and hedgerows, were to be a significant influence on much of his work both then (Tree Study 1952) and later on (Twig Structure 1970).

During his years as Curator of Eastbourne's Towner Art Gallery from 1958–64, the sea's proximity became an intermittent visual stimulus, manifested in such works as Marine Impact and Marine Encounter (both 1959) which hum with the pervading spirit of CoBrA, known for the vigour and spontaneity of its artists' works. He would periodically experiment using different media, generally ink and acrylic, applied by unconventional means such as differently contoured bathroom sponges and a discarded four-inch decorators brush with missing tufts of bristles. For the subsequent three and a half decades, such examples of experimentation continued as a leitmotif throughout William Gear's works on paper, which resulted in plenty to intrigue, surprise and admire. The complete exhibition can be viewed online at www.fossegallery.com