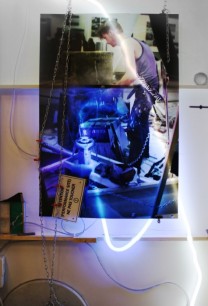 ‘It's no longer a thing but a performance group’

Joris Van de Moortel, a  young Flemish artist, is as much a visual artist as a musician. For him the transition from one to the other occurs through performance, in which live music is a crucial component of both his practice and creative logic.

An ardent admirer of German Romanticism, Joris Van de Moortel has the same desire for intense experiences and emotions as the artists of the 19th century. Whereas the painter Caspar David Friedrich attempted to record on canvas the tempestuous feelings aroused in him by the immensity of the sea, Joris Van de Moortel places himself in danger during each of his performances. Improvised rather than planned, it is the risk involved that gives the artist the powerful sensations he seeks for triggering the creative process in his works.

One of his favourite ‘instruments’ is the Cylinder, a giant tube inside which he installs the mobile stage for his performances. Since 2012, the date of its first presentation at Le Transpalette art centre in Bourges (France), this artistic and sonic UFO has constantly evolved, changing with every setting.

The Cylinder has recently made the walls reverberate at Palais de Tokyo in Paris and at Villa Empain in Brussels during the group exhibition ‘Music Palace, The power of music seen by visual artists’.

The performance always starts with the crashing sounds of the guitars, which take Joris Van de Moorel into a sort of hypnotic trance. It is the trance that directs the acts of destruction that are then visited on the instruments, amplifiers, microphones and electric cables before the artist turns on the Cylinder itself. The mutilated set is often spattered with indelible marks of paint or glue resulting from the performance.

But although everything is smashed, nothing is lost. Once he is back in the solitude of his studio, Joris Van de Moortel recycles this ‘debris’, which in fact provides him with the raw material of his works.

Joris Van de Moortel confines these objects-cum-attestation inside transparent cases. He thus reproduces the chaos that brought them into being while placing careful emphasis on how they appear inside the restrictive frame of the work.

The rigour with which he treats their presentation is common to all the works displayed at the galerie Nathalie Obadia. Joris Van de Moortel achieves this with an unexpected sense of harmony, as in this composition that combines a circle and a straight line with Constructivist precision.

In other works he uses neon with the same deftness as watercolours. The ‘trace of electric light’ escapes the limits of the work in the same way that water-paints overflow a contour.

The selection of works on show at the Galerie Nathalie Obadia explores two new paths of pictorial research, one using drawing for its figurative and narrative capacities, the other placing objects and colours within abstract compositions.

Through digression and humour, Joris Van de Moortel injects his work with a poetic and cathartic dimension that associates him with Marcel Duchamp and Marcel Broodthaers. In offering us his own version of a 'readymade', the Belgian artist invites us to enter his creative universe. Its innate precariousness lays bare the permanent tension that exists between the order and chaos that preside in both his plastic and musical work.

In November 2015 the BE-PART contemporary art centre in Waregem near Ghent (Belgium) will present the first institutional exhibition of the work of Joris Van de Moortel in Belgium.

Take out a free subscription to read all the articles and reviews in Cassone – over 1000 in our archive!