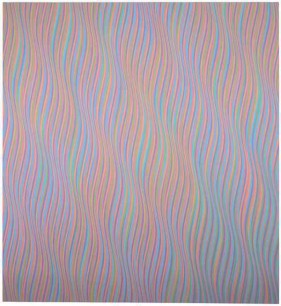 ‘Bridget Riley: The Curve Paintings 1961–2014’ is the major exhibition at De La Warr Pavilion this summer, and surveys the artist’s use of the curve motif in a career spanning over 50 years.  The show launches a year of celebrations marking 80 years of the Pavilion as one of the first and most significant modernist public buildings in the UK.

The exhibition is formed from a selection of over 30 paintings and studies from throughout Riley’s career, illustrating the artist’s close dedication to the interaction of form and colour by looking at a single motif. It is designed to directly connect with the elegant architecture of the De La Warr Pavilion, opening out the interior space towards the sea.

‘Bridget Riley: The Curve Paintings 1961–2014’begins with early, black-and-white works such as Crest (1964), followed by paintings of twisted curves of blues, pinks and greens from the 1970s and 1980s. Recent works, including Rêve (1999) and Red with Red 1 (2007), combine curvilinear shapes with vibrant colour, described by Riley as ‘generating sweeping rhythms’. The survey also includes – for the first time outside Germany – the wall painting Rajasthan (2012).  The paintings are complemented by preparatory studies that offer insight into a number of notable shifts within Riley’s career.