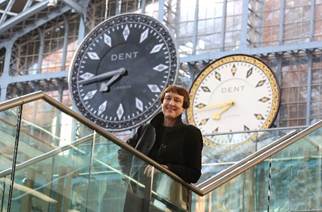 One More Time is the first artwork in the recently announced partnership between HS1 Ltd. (owners of St Pancras International station) and the Royal Academy of Arts to develop Terrace Wires. Terrace Wires is the fourth leg of London’s rotational public art spaces, alongside the Fourth Plinth, Serpentine Gallery and the Tate Modern’s Turbine Hall and offers 48 million travellers each year the chance to experience the latest contemporary art as they pass through the station.

Suspended from the Grade 1 listed Barlow Shed roof, One More Time is a working replica of the station’s iconic DENT London clock, reversed out in black with white hands and numerals and silver detail. It is made from aluminium, steel and Jesmonite and measures 5.44 metres in diameter. The black clock is situated 16 metres in front of its inspiration, so for those alighting from the trains, the original face will gradually appear eclipsed. The artwork is made with DENT London clocks.

Cornelia Parker RA said:
One More Time is conceived to invoke meditative thoughts on the passage of time, life and mortality. The clock is the most conscious focus of a railway station, a dominant force. Everyone is watching the clock, checking if they are late. The piece will introduce the idea of a parallel frame of reference, that of a slower astronomical time.

One More Time by Cornelia Parker RA can be viewed at St Pancras International station until early November 2015.