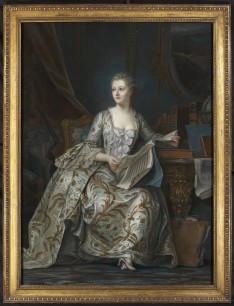 Visitors to Olympia International Art & Antiques Fair in London from 18–28 June will be able to see an exact replica of the magnificent and imposing life-size portrait of Madame de Pompadour, which now hangs in the Louvre, at the stand of specialist picture dealer Nicholas Price (stand No F16).

This pastel is not only an exact replica, but is also the largest and finest known copy of the picture commissioned by Madame de Pompadour herself from the artist Maurice-Quentin Delatour (1704–88). The original was exhibited in the Paris Salon of 1755 and is never lent for exhibition on account of its delicate state.

This superb, though unsigned, copy of Madame de Pompadour probably dates to the late 1830s. The attention to detail is painstaking and even the frame is an exact copy of the version by Delatour. Quite why it was executed, by whom and for what purpose still remains a mystery.

A leading fashion icon, Madame de Pompadour was one of the few women to play a decisive role in the political, intellectual and artistic life of 18th century Europe. A great collector and patron of the arts, she influenced a generation of artists and musicians. The elegance of the 18th century can be considered as being itself almost an expression of the ‘Pompadour style’.