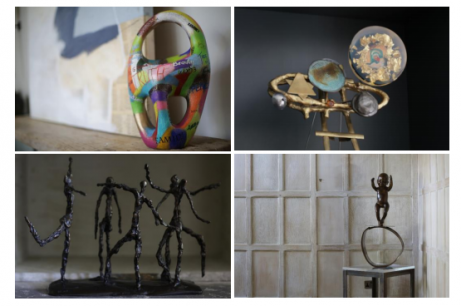 Named after John Milton’s 17th-century epic poem, the exhibition will feature a number of Krok’s intricate and elaborate sculptures as well as two multimedia pieces. The exhibition, like much of Krok’s past work, is inspired by ancient religious traditions. ‘Paradise Lost’ will focus on the dichotomy between human innocence and human violence. Themes that Krok addresses include creation, the fall of man, the loss of human innocence and the precarious nature of human free will.

In keeping with these themes, much of the aesthetic vocabulary of the sculptures exhibited in ‘Paradise Lost’ is evocative of the imagery and symbolism associated with ancient Old Testament traditions. In particular, the pieces in the exhibition are specifically influenced by Kabbalah, an ancient form of mysticism originating in Judaism.

Simone Krok has said of the exhibition:
I want to use this exhibition to explore many of the questions that stem from the idea of the ‘Fall of Man’ and what these mean in the 21st Century. In particular, one of my aims is to ask how we, the human race, lose the innocence we were born with as children and why it is that we so frequently use our freedom of choice to enter into the destructive path of greed, power, violence and manmade suffering that is all too common in our modern world.

The exhibition is set to feature many of Krok’s most exciting and thought-provoking work yet, including Crouching Creatures, a series of three bronze sculptures based on the theme of creation, which explores the biblical fall of man, and the resultant potential for both good and evil born from freedom of choice. Another of the exhibition’s centrepieces is Ein Sof Ring/The Light of Infinity, a 125cm-high bronze ring etched upon which are the ten aspects of Sepirot, the Kabbalic concept for the ten aspects of creation.