The cloth that clothed the ‘thin red line’ at Waterloo 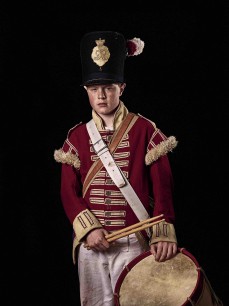 The Battle of Waterloo was a landmark in European history – the closing charge of the first global conflict, the final defeat of Napoleon and the start of a sustained period of peace.It was also the last great battle before the invention of photography.

Opening for the anniversary, Somerset House in London will present ‘Unseen Waterloo: The Conflict Revisited’, a series of 80 life-size 'imaginary portraits' of the soldiers who served at Waterloo by photographer Sam Faulkner, exploring how we remember the fallen. The backdrop to the portraits features some very special fabric.

The Yorkshire textile mill Hainsworth provided the rich scarlet woollen cloth used to dress the original ‘red coat’ soldiers in 1815. The cloth is still made today in exactly the same way at the 232-year old mill – and will be worn by ‘soldiers’ taking part in this year’s historic re-enactment. Over 175 metres of the mill’s scarlet cloth has been specially made as a backdrop to Sam Faulkner’s exhibition in London.

Hainsworth has been responsible for weaving fabric associated with the nation of England ever since the company was established in 1783. In 1815 Hainsworth provided the scarlet uniforms to the English forces at the Battle of Waterloo, helping to coin the enduring reference to the battle of “the thin red line”. Many of the images that continue to be used across the world to celebrate Great Britain feature Hainsworth cloth, including the Striking Scarlet that is now worn by the Royal Guards and ceremonial uniforms worn by the Royal Family during state occasions.

The exhibition runs from 12 June – 31 August and admission is free.

Tom Hainsworth, MD of Hainsworth, said:
In 1815, our mill manufactured the scarlet fabric for the English forces at the Battle of Waterloo, helping to coin the enduring reference to the battle of ‘the thin red line’.

Waterloo had major significance for Britain, helping us to become a global trading nation. Hainsworth was one of the companies that flourished as a result of that.

The mill would have been phenomenally busy at the time of Waterloo – war always stimulates the textile trade. We have continued to play a role in subsequent wars including both World Wars and were commissioned by the British Military to develop khaki to better fit modern warfare.

Today, our military fabrics are increasingly attracting the attention of fashion designers including the likes of Christopher Raeburn and Jenny Schwarz.