A new take on art and Christianity at the Lightbox 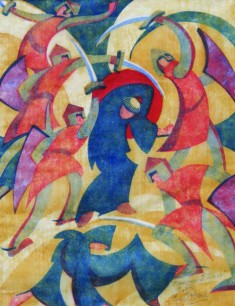 The Ingram Collection: Art and Christianity

For hundreds of years the theme of religion has been a popular subject for artists. From the 18 July – 27 September 2015 The Lightbox, Woking, UK will explore how artists from the 20th and 21st centuries have portrayed Christianity, in a unique new exhibition ‘The Ingram Collection: Art and Christianity’. The changing attitudes to religion over this time period will be reflected  in the pieces on show, which will include works by Dame Elisabeth Frink, Geoffrey Clarke, Eric Gill, Peter Howson and Tristram Hillier. The exhibition will have three main strands that will focus on artists’ representation of Bible stories, their representation of Christian themes and imagery, and depictions of church architecture and art commissioned for churches.

Exploring the themes of the exhibition

The first strand of the exhibition will focus on the highly creative and personal way in which artists have responded to stories, events, scenes and religious motifs from the Bible. The  Garden of Eden and in particular Adam and Eve will feature as the source of inspiration for a notable number of pieces, from the finely drawn charcoal Eve No. 2 (1919) by Austin Osman  Spare, to the abstract sculpture Birth of Eve (1929) by Leon Underwood, to fresh, contemporary interpretations such as Adam and Eve (2014) by emerging artist Suk Chan, who created it on an IPad. Other subjects in this strand will include the depiction of angels, as illustrated by the vibrant Red Angel (1927) by Leon Underwood and the humanized Ascending Angel (1932) by Glyn Philpot.

The second theme will explore the powerful yet contrasting way in which artists represent Christian imagery. Part of this feature will be the portrayal of the Stations of the Cross, the focal point of which will be the large scale The Crucifixion (1954) by Tristram Hillier and Resurrection (1999) by Peter Howson. Other notable pieces include the linocut Monseigneur St Thomas (1931) by Cyril Power, which depicts the murder and martyrdom of St Thomas Beckett in Canterbury Cathedral in 1170. To highlight how attitudes have changed towards traditional imagery, the exhibition will include contemporary pieces such as the 2009 photograph on a light box entitled Cross Dressing by Emma Woffenden. This depicts a white dress hanging loosely from an iron cross.

The final strand of the exhibition will have two elements – scenes of churches and church architecture and art that has been commissioned for churches. Eminent landscape artist Edward Bawden will have a small selection of works showcasing the varying styles of church architecture, from the more provincial Lindsell Church (1956) to the grand St Paul’s from the Thames (1966). Other notable artists whose works portray the more traditional church scene include George Large and John Craxton.

The section on art for churches will feature a number of pieces by Dame Elisabeth Frink, such as Walking Madonna (1981) and the significant piece Eagle Lectern (1962), commissioned by Coventry Cathedral after the First World War to rebuild the legacy of the church and memorialize those who took part in the war. This final theme will continue beyond the Upper Gallery where the exhibition is displayed and into The Lightbox courtyard. Here, Geoffrey Clarke’s Square World (1959) series of five aluminium reliefs, originally commissioned by St Chad’s Rubery in Birmingham, will be on show.

The Ingram Collection of Modern British and Contemporary Art

On loan to The Lightbox – the Art Fund Prize-winning gallery and museum in Chris Ingram’s hometown of Woking – the Collection comprises almost 650 paintings and sculptures. Of these, over 450 are by the most important artists of the modern British era, amongst them Elisabeth Frink, Barbara Hepworth and Eduardo Paolozzi.

In addition to creating a unique local opportunity to see world-class modern British art, The Ingram Collection lends works to major exhibitions and galleries and has earned Chris Ingram deserved acclaim as ‘one of the most active and thoughtful collectors of Modern British Art today’ (Stephen Deuchar CBE, director, The Art Fund).

‘The Ingram Collection: Art and Christianity’ will be on show in the Upper Gallery at The Lightbox gallery and museum from 18 July 2015 – 27 September 2015.