What could be more like living than life itself? 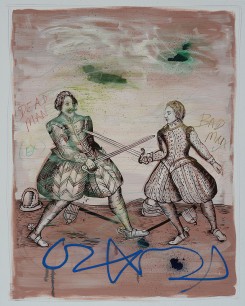 Kerlin Gallery, Dublin is presenting ‘More like living than life itself’, an exhibition of new work by David Godbold.

This new body of work marks a shift in focus within Godbold’s practice. Long preoccupied with mimetics, or visually depictive representation, this new work sees his attention move to diegetics, storytelling managed by an authorial creation of points of view, either interior or exterior narration.

Deep washes of colour and textual annotations are applied over the top of Godbold’s delicately rendered fine ink drawings, which take in diverse historical and literary references, while a series of sketched-on frames or ‘panel borders’ have the potential either to isolate or to unify co-existing narrative elements. Largely abstract, these new additions tip the balance away from the depicting line or ‘object’ as the focus of painting, and towards the negative space that surrounds it. Background becomes just as important as foreground, knowledge is supplanted by uncertainty, subject matter is cast adrift in a sea of colour, shape, gesture and fragments of text. With this increased emphasis on the anti-object, Godbold seeks to call into question the culture of inherited or collected knowledge.

David Godboldhas been exhibiting internationally since the mid-1980s. He relocated to Ireland at the beginning of the 1990s, where he continues to live and work. At a formative residency at PS1/MoMA, New York in 2000, Godbold began pairing classically articulated ink drawings with very contemporary, irreverent ‘captions’, forming image/texts – a practice that has remained at the core of his work. Clashing past with present, highbrow with lowbrow, Godbold’s best-known work bridges old master painting with contemporary, populist forms of media such as political cartoons, comics, children’s colouring books and illustrator’s compendiums.

David Godbold will appear in conversation with critic and lecturer Dr Caoimhín Mac Giolla Léith at 2:30pm on Saturday 12 September.