Work of the late French painter, Eugène Leroy, to show in Paris 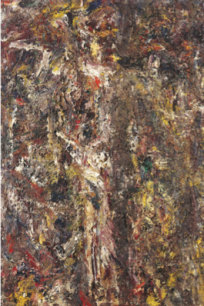 Blending the most diverse heritage, from Rembrandt to Malevich, and including Jean Fautrier, Eugène Leroy explored the multiple possibilities of material and matter, deploying a science of impasto which conferred an incomparable relief to his paintings. This paradoxical opacity, made of light and colours, gives the onlooker the impression of ‘entering into a cavern’, as one of Leroy’s greatest admirer’s, the German painter Georg Baselitz, would say: ‘There I found images brown like the fields, like stone, wood, moss, scent’, he recounted, reflecting on his first encounter with Leroy’s oeuvre, ‘as though all the painter’s trousers were hanging from a hook and told the story of an unknown masterpiece’.

The ‘Peintures-Fusains’ exhibition presented at the Galerie Nathalie Obadia allows visitors to discover 20 works, charcoals on paper and a dozen oil paintings, in medium and large formats, produced during the last decade of Leroy’s life from 1990 to 2000 – of major importance because during this time the artist achieved international recognition. The latter is illustrated in particular by Leroy’s consecutive participation at the Biennial of São Paulo in 1990 and Documenta in Kassel in 1992, both while the artist continued to pursue his personal trajectory, resolutely at the margins of the period’s dominant trends. Two major retrospectives would follow at the Musée d’Art Moderne de Nice in 1993 and the Kunsterverein in Düsseldorf in July 2000, three months after the artist’s death in his home-studio in Wasquehal. The Peintures-Fusains exhibition is also an opportunity to showcase five oil paintings of major importance, dating between 1988 and 1991.

Pour un corps de femme, Seuls, Homme en croix, Lumières sur Marina, La marée, Noël 88, Lumières d’hiver ... Evocative, the titles of the paintings by Eugène Leroy presented at the Galerie Nathalie Obadia convey the constant attention he paid to light and human representation; his way of clashing with his subjects, which he seemed to tame through paint to before negating their contours; his attempt to capture their essence while conserving their mystery, buried beneath an accumulation of layers, added year after year, shaping a face, body, landscape. The drawings obey the same concerns, as art critic Denys Zacharopoulos has remarked: ‘But it is from the shadow, made up of multiple interwoven or blurred charcoal lines, that bodies and faces emerge like apparitions’.

Through this exhibition, which offers onlookers a kind of epiphany and a genuine ‘celebration of the senses’, the Galerie Nathalie Obadia is proud to pay homage to one of the great French painters of the second half of the 20th century.

Despite his participation at the Biennial of São Paulo in 1990 and Documenta in Kassel in 1992, where his work attracted much attention, his work remained unknown for a long time owing to its unusual nature. For 15 years now, institutions, the art market and a new generation of artists, including German artist Georg Baselitz, have shown a genuine renewed interest in Leroy’s work, which has contributed to a new recognition of it. In 2010, after an important donation of the sons of the artist,  the MUba-Eugène Leroy in Tourcoing presented ‘L’exposition du centenaire’, the most important retrospective devoted to the artist, accompanied by a monograph, which became a reference work, and the ‘Georg Baselitz-Eugène Leroy: le récit et la condensation’ exhibition in 2013, a huge critical and public success. Eugène Leroy’s works feature in many prestigious private and public collections, including those at the Fondation Maeght (Saint-Paul de Vence), Centre George Pompidou (Paris), Musée d’art moderne de la Ville de Paris (Paris), Stedelijkmuseum (Amsterdam), Berardo Collection (Lisbon) and Ludwig Museum (Cologne).