Fashion, fantasy and politics in an English garden 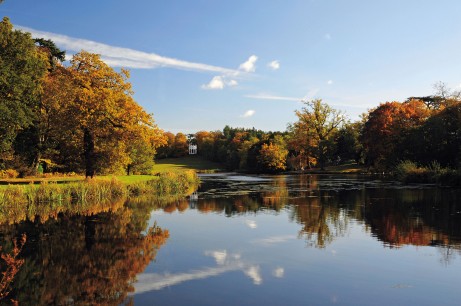 Painshill was the creation of the Hon. Charles Hamilton (1704-1786), one of the many eighteenth-century gentlemen who turned their gardens into works of art. In the 1730s, inspired by both paintings and his experience of Italy, he set out to create an English landscape garden based on the work of artists such as Claude Lorrain, transforming a hillside sloping down to the River Mole near Cobham in Surrey into Painshill Park. It became a leading example of the English landscape garden style, with its ingenious and complex layout, including a large serpentine lake and meandering paths.

Hamilton improved the soil, imported North American trees and shrubs, set up two vineyards, and introduced all the built features of the newly fashionable landscape garden repertoire: a Gothic Tower and a Gothic Temple, a Temple of Bacchus, a (purpose-built) Ruined Abbey, a Grotto, a Hermitage, a Mausoleum, and a Chinese bridge. The gardens were independent of the House, and although this was not quite unique (the same is true of Stourhead) it made the Park a complete entity.

One of the structures, recently re-created, has become the ‘logo’ of the present-day Park and takes pride of place on the title page of the publication – the Turkish Tent. The view from this charming blue and white creation was said to be Hamilton’s favourite, looking down over a sweep of the grounds.

Hamilton was a man whose visual sense was highly developed, though his Park was not only art in the modern sense, but also art in the old sense of ‘artifice’.  Many of the features were deceptive. Neither lake or lawns could be seen in their totality from any one viewpoint, so could appear to be larger than they actually were. The Hermitage looked like one building from the front, another from the back. Materials, too, were illusionary. Wood and brick were made to resemble stone. The brick Grotto, and the island on which it sat, were covered with 'tufa' (in fact a spongestone) to give the impression of marine rock. The interior of the Grotto was studded with semi-precious crystals and shells, which looked magical by candlelight.

During the 30-odd years in which it grew, many other landscape gardens were being developed, some of which may have influenced Painshill’s progress, and vice versa.  It wasn’t only artistic fashion, but politics, that inspired many landowners to transform their estates. This apparently natural landscape garden style, cultivated by the Whig opposition party, expressed a freedom from authoritarian rule and regulation demonstrated by the grand French gardens and exemplified by Louis XIV's Versailles.

Visitors were not expected simply to see the gardens, but to experience them. They followed an official route that optimized all the effects in a cumulative sequence, viewing buildings and plantings from a distance before approaching them more closely.

Hamilton was recognized by his contemporaries as being something of a pioneer of the landscape garden style. Painshill was admired by all the garden writers of the eighteenth century, and there were so many images made of it that the book devotes a whole chapter to them. There was also verse: the Rev. Stephen Duck wrote of the ‘…groves for ever green; And vineyards pregnant with the gen’rous bowl, To chear the drooping heart, and warm the frozen soul’.

Until the Second World War, Painshill was in the hands of a succession of private owners, all of whom continued to care for the estate. But in 1948 it was spilt between different ownerships, and by the 1970s many of the original features had become overgrown, damaged or destroyed. In 1981 the Painshill Park Trust was formed to bring it all back to life. Much of the estate has now been consolidated through purchase. Buildings have been restored or rebuilt, and trees and shrubs planted. Even part of the celebrated vineyard has been replanted; the resulting white, rosé and sparkling wines are now on sale in Painshill’s shop. An Europa Nostra medal was awarded in 1998, and the long-term aim is for World Heritage Site status.

The hard work is not over. More restoration work still needs to be done, and the Trust must continually raise money and recruit volunteers for maintenance and interpretation. At least they can look forward to the benefits global warming should bring to the vineyard.

Michael Symes’ Mr Hamilton’s Elysium: The Gardens of Painshillis a book for everyone. The general reader can learn about one of Britain’s most important landscape gardens. The undergraduate studying art or social history can find a great case study in eighteenth-century culture and taste. And the academic historian who specializes in art, gardens or botany can find detailed discussions of each of these subjects, supported by scholarly references. Project managers should find it interesting too, for the book is an object lesson in how a group of people can succeed in achieving their long-term goals with careful planning and management, teamwork and volunteer recruitment, and fund-raising.

The author is a professional garden historian, and a member of Painshill Park Trust. He has undertaken much of the historical research underpinning the long-term restoration that this book documents and celebrates so well. It covers every aspect of Painshill’s history and recent resurrection, together with a biography of its creator and an account of his collections. The wealth of images include a large amount of archive material, and photographs from the 1970s, which show Painshill at its lowest ebb, are contrasted with current renovations.

Well worth a visit.

Media credit: From Mr Hamilton’s Elysium: The Gardens of Painshill by Michael Symes