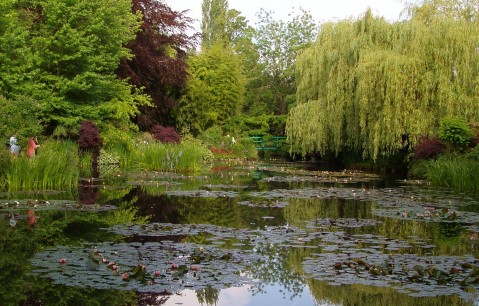 Claude Monet moved to Giverny in 1883, making painting expeditions from there to the Normandy coast, the Mediterranean, London, Venice and even Norway. Then he began to concentrate on remodelling and painting his gardens, exhibiting the subsequent works as ‘Water Landscapes’ at the Galerie Durand-Ruel in 1909 and working during the First World War and after on his ‘Grandes Decorations’ based on his waterlily pond. In 1927, just after Monet’s death, these works were finally housed in Paris’ Musée de l’Orangerie, where they can be visited today.

Pierre Georgel’s Claude Monet: Waterlilies (Hazan, 1999) would be an excellent overview text but costs £42.97, whereas its main competitor, Monet: Waterlilies: The Complete Series by Jean-Dominique Rey and Denis Rouart is £24.95 or less and is recommended for the serious general reader. Julie Rouart, with the help of Camille Sourisse, sorts out the various sets of paintings in exemplary catalogue raisonné manner, and the volume contains eight gatefold pages of the Orangerie decorations together with period photographs.

Rey and Rouart open with long chunks from Monet’s autobiographical recollections, in 1900, to the journalist Thiébault-Sisson, telling how, for example, he avoided school and ran along the cliffs in summertime. Denis Rouart’s introductory essay provides a useful overview of Monet’s career for those new to the subject, leading into his own extended account of the ‘Waterlilies’. Rouart is particularly good on how Monet makes the reflected sky ‘the cynosure of his large [Orangerie] panels, expressing a sense of visual ecstasy’. Jean-Dominique Rey’s essay relates how Monet’s late work emerged from his earlier development, such as the ‘atomization’ of landscape elements in the ‘Ice Floes’ paintings and the use of water as a mirror in the ‘Poplars’ paintings. The fraying of volumes in space and the increasingly fleeting temporality of his later work lead to what Rey sees as a fresh sense of the continuity of nature. Finally Rey discusses the supposed ‘Monet effect’ on post-war painting, though his fellow-author Rouart dissociates Monet’s art of ‘actual visual sensation’ from the abstraction it was claimed to have sired.

The three remaining books reviewed here are rather more specialised in character, though all are interesting in different ways. The substantial catalogue of the 2010 Gagosian Gallery show is the closest to a general book on the ‘Waterlilies’. It includes a significant art historical essay by Paul Hayes Tucker, exploring the project as some sort of fusion of Monet’s private and public worlds, with period photographs as well as magnificent details of the paintings. It does, however, cost well over £60.00 and this exhibition included only 27 works. More contentiously, Tucker argues that Monet’s earlier work was full of patriotic associations but that the Dreyfus affair sullied nationalism and hence Monet turned to the waterlily pond for new imagery. This makes sense only if the earlier work is indeed seen as deliberately French in connotation.

The Gagosian catalogue also contains a complete compendium of translated reviews and articles on the ‘Waterlilies’, including the full press response to Monet’s 1909 Durand-Ruel exhibition. Claudette Lindsay provides the most extended account to date of Monet’s library. Monet owned nearly 600 books: novels (many non-French), artist’s writings, accounts of 19th-century art, and art criticism, but hardly any art theory or aesthetics. There are numerous books by Geoffroy, Mirbeau, and Clemenceau (all associated with Radicalism), followed by Balzac, Hugo, Ajalbert, and the Goncourt brothers. The catalogue also contains a reprint of Michel Butor’s wonderful 1968 essay ‘Monet, or the World Turned Upside Down’.

The slim booklet by Ann Temkin and Nora Lawrence published to coincide with New York’s Museum of Modern Art’s 2009–10 exhibition of the ‘Waterlilies’, tells the story of how, in 1955, MoMA came to buy a vast late ‘Waterlilies’. This was followed by two 1956 purchases. Two of these three were destroyed in a fire in 1958, to be replaced that same year by a three-canvas ‘Waterlilies’ decoration. Yet buried within this seemingly simple story are unexplored complexities. Late Monet is appreciated, we are told, as a consequence of the development of all-over post-war American abstraction. So it is not that Monet’s vision is now being appreciated but that certain qualities of all-over composition are being extrapolated in a revised search for art historical precedents for Barnett Newman and Jackson Pollock. Towards the end of the booklet, Temkin and Lawrence then state that actually Monet’s late practice is ‘far removed from the mentality of the Abstract Expressionists’. We never get to understand how Newman’s early anti-Impressionist stance changed at some point in the 1950s. The authors do not discuss the interests involved in the oft-told story of the post-war ‘triumph of American painting’.

Xavier Girard’s Three Men in a Garden, unfortunately available only in French, is a completely different sort of text, all fact and fiction at once. Girard imaginatively explores what might have happened in the few hours that Henri Matisse and Fauve painter Albert Marquet spent with Monet at Giverny in 1917. He draws on the published kitchen notebooks (see Monet's Table: The Cooking Journals of Claude Monetby Claire Joys, Simon and Schuster, 1990) to conjure up a likely meal, following known visits to imagine the pattern of garden and studio perambulations, and pursuing what they might have talked about. I found the account utterly riveting. Monet was working through his final project, while Matisse had already moved away from his early-war Cubist endeavours without yet fully turning to the light-atmosphere of his Nice period. Girard ends by suggesting that the silence of all parties over the visit was because it was either too late or too early for it to stimulate any new pathways.

Media credit: Cath Follin. This image is not taken from these books. We are unable to show book images for copyright reasons

Claude Monet (1840–1926) is widely regarded as the most important of the Impressionist group of painters. He work Impression, Sunrise is the origin of the group's name (in 1874 the critic Castagnary said that they were Impressionists ‘in the sense that they render not the landscape but the sensation produced by the landscape’). His best-known works are his series of paintings, 'Haystacks', 'Poplars' and 'Rouen Cathedral'. The 'Waterlilies' were a state commission and are housed in two specially constructed oval rooms in the Orangerie, Jardin des Tuileries, Paris. Some critics have regarded them as influential on the (post-war)  American Abstract Expressionists.

Impressionism
The Impressionists staged eight exhibitions of their own between 1874 and 1886, making a significant challenge to the official Paris Salon’s near-monopoly of exhibiting opportunities. They did not adopt the name ‘Impressionists’ until their third exhibition in 1877. Indeed, insofar as the key artists focused on discovering what the experience of seeing involved, with few prior assumptions, Impressionism  constitutes a vital step leading to modern art’s open field of enquiry.

As the Impressionist shows developed, there was something of a split between work that emphasized shifting light experience (and rural landscape), as seen in the work of Monet, and modern life subject-matter, associated with Degas, for instance. Many now-forgotten artists showed in the eight exhibitions but today we remember especially Monet, Renoir, Pissarro, Degas, Gauguin, Cézanne, Morisot and Cassatt. Its main practitioners died between the 1890s and the 1920s but Impressionism’s impact extended in a longer history across the entire globe.

Monet's house and garden at Giverny are open to the public. The property is close to Vernon, a town 75km from Paris, accessible by train from Gare St Lazare in Paris. There is a bus to Giverny, and taxis are available (the distance is about 7 km).