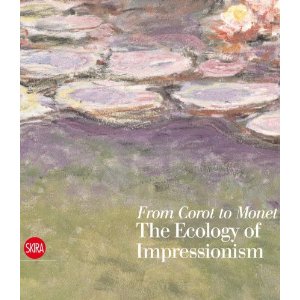 From Corot to Monet: The Ecology of Impressionism

Amid current widespread ecological debate, linking Impressionism and ecology is an idea whose time has come. Our current level of  industrialization ‘is no longer capable of surviving’, anthropogenic global warming is melting the icecaps, and all this transgresses the ethical principle of transgenerational responsibility, argues Michael Zimmermann, in his contribution to this exhibition catalogue. Yet such views are contentious. British politician Nigel Lawson has suggested that our way of life is quite sustainable. Martin Durkin dubbed anthropogenic global warming a ‘swindle’ in a 2007 Channel 4 programme, while ‘sounder  science’  indicates how sunspot activity correlates more closely with temperature variations than CO2 emission patterns. There is evidence that overall icecap melting is not occurring. The idea of transgenerational responsibility has been questioned philosophically and politically. Yet such views are the basis of this new study coupling ecology with the world’s favourite art movement, Impressionism.

This substantial and beautifully illustrated catalogue from an exhibition in Rome’s Complesso Monumentale del Vittoriano assumes an audience of art historians, though interest in Impressionism is widely shared. Its eight essays feature one by Greg Thomas, author of Art and Ecology in Nineteenth-Century France (Princeton, 2000). John House writes on the meaning of landscape, Richard Bretell examines the journal La Nature and MaryAnne Stevens explores the work of Sisley. We also have Monet’s Norman subjects (Maria Messina), landscape photography (Abigail Solomon-Godeau), and ‘radical alienation’ (Michael Zimmermann).

The exhibition started with the Barbizon painters’ treatment of ‘nature as a vital force’ (1850–70), followed by ‘the ecology of Impressionism’ (1870–80), and finally ‘nature as a refuge’ (1880–1920). Stephen Eisenman traces the core ecological ideas back to Linnaeus in the eighteenth century. He describes the emergence of an idea of ecology in Germany and France, from the first use of the word ‘ecology’ in Haeckel’s Generelle Morphologie (1866) and exemplified in the writings of the radical geographer Elisée Reclus, whose book La Terre (1869) focused on natural systems alongside human ones. Key landscape painters of Impressionism are seen as embodying this worldview in the 1870s.

Pissarro and Sisley are particularly discussed. Sisley’s focus on flooded rivers is related to concerns that flooding resulted from deforestation. Pissarro pictured ecologically the connections between industry, agriculture and nature, and Impressionist style is seen as embodying what is called a holistic vision (though it might be more easily understood in perceptual terms). Thus what earlier writers saw as tensions between signs of industry, older agrarian ways, and nature, Eisenman interprets as a positive, ecological worldview. He calls this holistic perspective ‘potentially radical’ in that it ‘exposes the dynamism and contingency of a social system, and thus its potential for change’. Alternatively, Greg Thomas calls this an ‘assimilationist’ aesthetic, in which the old rural-subsistence economy is pictured as part of the same world as the new capitalist-industrial one.

The catalogue ends by presenting the period from 1880 onwards as the undoing of this holistic ecological worldview, the retreat into ‘nature as a refuge’. Chief culprit is Monet, whom Eisenman sees as giving up the use of artistic representation to relate society and nature, instead opting for an ‘island utopia’ (Giverny) where ecological insight is banished in favour of a subjective fusion of art and nature, supposedly modelled on the earlier Barbizon landscape painters. For Eisenman, Monet’s Waterlilies represent a means of seeking refuge from the world.

Eisenman’s vigorous notion of ecology eschews Barbizon anti-industrialism and accepts humankind’s needs for industrial production. He does not see production and consumption as evils to be expunged from the world through a proper ‘deep ecology’, which its opponents would see as fundamentally anti-humanist and anti-progressive. Nonetheless, before we plump for such ‘green socialism’, it is worth remembering that ecology’s model of nature as Haeckel’s self-correcting system comes from the classic bourgeois economics theory that supply and demand will be balanced through price. (See James Heartfield’s Green Capitalism, Mute Publishing, 2008).

Ecologist activists today are more likely to be romantic anti-industrialists than people seeking that 1870s balance of nature, agriculture and industry discussed by Eisenman. Those informed by ecology today are likely to seek refuge in their own idea of Monet’s pure spiritual late landscape. Monet’s immersion in his Waterlilies may not, however, represent a worldview with which ecological new-ageism would be happy. As Greg Thomas suggests, the Waterlilies are based on the worship of ‘sensate experience as the unique, essentially materialistic meaning of life’. Furthermore, Michael Zimmermann’s essay discusses immersion in the landscape as predicated upon a prior detachment from agrarian involvement, and he rightly sees such immersion as speaking paradoxically of an increasingly radical alienation. Monet’s Waterlilies embody a visionariness developed from his materialistic Radicalism (an individualistic, anti-State, anti-Church and materialistic worldview.) Such work involves a humanistic search for wholeness beyond what can be found in developed capitalist modernity. It seems questionable, then, for Eisenman to imply that Monet’s late painting is problematic and to vaunt 1870s Impressionism in its bolting together of nature, agriculture and industry under capitalism, on the grounds that the latter alone is exemplary from a radical viewpoint, or indeed to see radicalism today as totally subsumed by ecology, whatever sort one has in mind. A fundamental rewriting of Impressionism on this basis seems equally implausible.

Buy the book on Amazon

The Impressionists derived their name from a painting, Impression, Sunrise (1872) by Claude Monet; the tag was intended derisively but the work of the group became the most popular art of the 20th century. Innumerable books have been written about the group, which included not only Claude Monet, often regarded as the leading figure, but also Camille Pissarro (1830–1903), Alfred Sisley (1839–99), Berthe Morisot (1841–95), Pierre Auguste Renoir (1841–1919) and Edgar Degas (1834–1917). Their first group show also included work by Paul Cézanne (1839–1906), Armand Guillaumin (1841–1927) and the older artist, Eugène Boudin (1824–98), a friend of Monet’s whose work is often seen as the precursor of Impressionism. They organised this show because most of them could not get their work shown at the official annual Salon, the major Paris art exhibition. Their work’s concentration on effects of light, shade and colour did not meet Salon requirements for drawing and composition. The American Mary Cassatt (1844–1946) later joined the group. It is partly owing to her efforts that so much Impressionist work entered American collections during the painters’ lifetimes.