Finding a thrill on Strawberry Hill 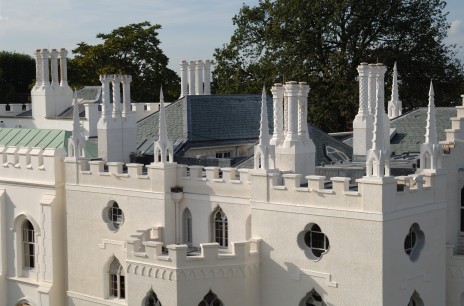 As I approach Strawberry Hill I expect the house to have at least a shadow of stone cold historic decay, even though the press pictures accompanying the news of its £9 million restoration show a stunning white edifice. Publicity images can mislead – isn’t there always a hint of patina in old buildings? But the images are true. The exterior dazzles with its fresh white-stuccoed walls, pointed arch and rose windows, moulded chimneys and pinnacles granting an air of Gothic loftiness. I think of snow-capped mountains, frozen arctic oceans with glaciers and icebergs, a fairy-tale edifice, a white iced Lilliputian children’s birthday cake baked for Gulliver.

Enchanted, I await a theatrical experience, just as its creator, Horace Walpole (1717–97) intended. A play may take months to produce, but Walpole nurtured his meticulously researched, executed and well-documented vision (through drawings, watercolours, letters, accounts, auction sale catalogues) for 50 years. The house is an exceptional example of Gothic revival both aesthetically and because its historicizing designs were realised via modern methods. Walpole’s architectural inspiration was fired by a sense for the aesthetic and sensual, rather than the religious purpose of Gothic style. For him, the sacred was a tool for the secular.

Walpole tried to create an aesthetic theme throughout the ‘public’ rooms. In a document now in the Fitzwilliam Museum, Cambridge, he explains:

Great effects may be produced by the disposition of a House, & by studying lights & shades, and by attending to a harmony of colours. I have practiced all these rules in my House at Strawberry hill…With regard to lights & shades. The first entrance strikes by the gloom: the Staircase opens upwards to greater light…The green closet is all light and cheerfulness within & without. The Star chamber and dusky passage again prepare you for solemnity…In hanging pictures, opposition makes harmony. Histories should be mixed with Landscapes or heads; & the latter shd be mixed. Sizes too, thus.

What fired Walpole’s passion for Gothic whimsy at a time when classical architecture was considered the height of good taste? He was part of the establishment, being a member of Parliament, the son of a prime minister, a collector, and a respected novelist. Strawberry Hill Friends members Anna Chalcraft and Judith Viscardi suggest that when, as a young man, Walpole visited many European and English Gothic churches he was struck by the ‘gloomth’ – the atmospheric warmth he experienced in underlit spaces, the contrast between cavernous, dark interiors and shafts of sunlight filtering through stained-glass windows. He found many ecclesiastical decorative details and objects, such as tombs and screens, beautiful; he was excited by the history of these buildings.  Walpole’s Gothic references stretched back to the thirteenth century.  Old St Paul’s Cathedral; King’s College Chapel, Cambridge; and Reims Cathedral inspired him

Thus when Walpole determined to have a ‘country retreat’ in fashionable Twickenham, by the River Thames, he did not want a conventional Palladian villa. He had the self-confidence to reject a uniform scheme and contemporary notions of symmetry or scale. Finding beauty in irregularity, he did not feel beholden to authenticity; he would use wood, stucco, painted wallpaper and pâpier maché in place of masonry. He would indulge in the phantasmagorical: why not erect mock monastic cloisters!

Similarly, Walpole’s art collection was not linked to a specific Gothic period or indeed any other artistic period. He was attracted to the unusual and innovative, including what was not necessarily valuable or scholarly. His eclectic collection included antiquities, enamels, earthenware, porcelain, arms and armour, miniatures, old paintings and watercolours.

Strawberry Hill began as a cottage that Walpole acquired in 1747, known locally as ‘Chopp’d Straw Hall’ because a coachman had built it with money saved by feeding the horses with straw instead of hay. The land itself had once been known as Strawberry Hill. Rather than demolish the cottage, Walpole expanded it.

The cottage came with five acres; Walpole added another 41 and created an informal garden with walks, a grove of lime trees, a small pool and folly.

The construction, interior design and furnishings of Strawberry Hill were planned by Walpole with his ‘Strawberry Hill Committee’: himself, John Chute and Richard Bentley. Chute was an architectural designer who shared Walpole’s love of antiquities and owned The Vyne, a house in Hampshire (now  National Trust property). Richard Bentley was a clever draughtsman who wrote plays and satires. His friendship with Walpole, the driving force and final arbiter of ‘taste’, was quite volatile.  Bentley is considered more fanciful and imaginative, introducing rococo excesses. Practical, structural advice was supplied by William Robinson, a surveyor – a clerk of the works at Greenwich Hospital.  Walpole also consulted the poet Thomas Gray, his companion on ‘The Grand Tour’.

After Walpole died – a childless bachelor – the house passed successively to various relatives, including Countess Waldegrave, who used it for political activities and entertaining. Design and structural changes reflected the needs and tastes of these owners.  In 1923 the Catholic Education Council purchased Strawberry Hill as a home for the Vincentian priests who ran St Mary’s teacher training college. This saved it from demolition, though without the funds to maintain and restore Walpole’s legacy to its original state. The ‘castle’ was gradually eaten away by the ravages of damp, rot, overexposure to sunlight, and squirrels.

The Strawberry Hill Trust was established in 2002 to secure restoration funds. The Trust took a 122-year lease of the villa from St Mary’s University College and raised £9 million from the Heritage Lottery Fund, English Heritage, World Monuments Fund, the Architectural Heritage Fund and other sources.

Activities at the house include education and research, exhibitions and visitor facilities.  Visitors tour some 25 rooms following an edited version of Horace Walpole’s own published Description. Actors playing Walpole and his housekeeper, Margaret Young, ‘escort’ one round via an audio guide. A video explores the restoration.

The painstaking restoration of the fabric of the rooms and the information available give a powerful sense of the original. The scale of Walpole’s achievement – the how and why – and the nature and active interests of the man himself are what intrigue.

Visitors enter by the Great North Gate into a large hall and, following the staircase, see Walpole’s original trompe l’oeil grey Gothic wallpaper. At every corner of the balustrade is a statue of an antelope holding a shield. After visiting the vast Great Parlour, which was the dining room, one heads towards the Blue Bedchamber and up more stairs through the Armoury. This is an open vestibule of three Gothic arches lighted by a stained glass window, where Walpole displayed arms and armour. One suit of armour may have belonged to Francis I of France.

Walpole once dreamed that he saw a ‘gigantic hand in armour’ in this area. This vision inspired him to write the first Gothic horror novel, the bestselling Castle of Otranto (1764), the house being the setting for the castle.

Bookcases in the magnificent Library have pierced Gothic arches. The 7,200 books once displayed here included publications by Walpole’s own Strawberry Hill Press. The chimneypiece is copied from the tomb of John of Eltham, Earl of Cornwall, in Westminster Abbey. The restored painted glass reveals the figures of Faith, Hope and Charity. The ceiling of the Holbein Chamber is copied from the Queen’s dressing room at Windsor. (In this room most of Richard’s ‘Now is the winter of our discontent’ speech was played in Ian McKellen’s film Richard III.) The Gallery, following, is the first of Walpole’s great staterooms, at 56 513 feet and 17 feet high. The fan-vaulted papier mâchéd and plastered ceiling is based on Henry VII’s chapel in Westminster Abbey and has been entirely re-gilded. New crimson damask has been woven for the walls. Walpole kept most of his collection of miniatures in the square-shaped Tribune, with its semi-circular recess in the middle of each side, the roof culminating in a star of yellow glass. The Round Room reveals ascagliola (faux marble) fireplace by Robert Adam.

There is little furniture and few artistic objects. Sadly much of the original contents was sold in 1842 at auction to raise funds for the destitute and wayward 7th Earl of Waldegrave. Some items are in the Victoria and Albert, the British Museum and the Lewis Walpole Library (Yale University), Connecticut, which has a database noting all the traceable artefacts, furniture and furnishings of Horace Walpole.

Michael Snodin, chairman of the Strawberry Hill Trust, explains that the Trust aims to display objects on loan, in their original settings or as part of exhibitions, and raise funds to buy back or commission copies of certain objects. They hope that other owners will be encouraged to donate objects in lieu of inheritance tax.

Restoring the villa to its state at the time of Walpole’s death was an arduous undertaking, says Snodin. It was not always possible to discover what had been there before. The conservation architects avoided ‘invention’ wherever possible, but occasionally they had to rely on their ‘reasoned’ imagination – perhaps a contradiction in terms!

In the spirit of Walpole, Snodin wants visitors to have an informing, enjoyable and entertaining experience, innovative and unusual – as its creator intended. Snodin is considering conservation craft workshops, interactive displays, promenade theatre, dramatic interior and exterior lighting. Perhaps I should suggest Gothic movies?

The architectural and interior design movement known as Gothic Revival emerged in the eighteenth century. It was inspired by mediaeval ‘Gothic’ buildings such as Reims cathedral, with their pointed arches and ribbed vaulting. Gothic cathedrals exude a sense of light and space.  As light from the tall stained glass windows shines upon us, we feel as if we are in touch with the heavens.
Gothic Revivalists used flints, brick, plasterwork, iron, wood, papier mâché, paper and paint, as well as stone, and borrowed from other historical and national styles.  ‘Gothicized’ garden buildings in country estates were an early feature of the Gothic Revival, heralding a welcome break from the conformity of neo-classical architecture. Gothic Revival architecture was both secular and ecclesiastical.
AWG  Pugin (1812 – 1852)  and Charles Barry (1795 – 1860) built the Gothic-style Houses of Parliament we know today, after a fire in 1834 had destroyed the earlier buildings. Pugin idealised the Middle Ages as a time of lost innocence and spirituality. Rejecting industrialization and secularization, Pugin and others embraced the architecture of the Middle Ages.
Strawberry Hill is one of the finest of the lighter and secular Gothic (or ‘Gothick’) buildings of the eighteenth and early nineteenth centuries. In the later nineteenth century heavier, often ecclesiastical, Gothic buildings appeared.

Special thanks are due to Michael Snodin, Chairman of the Strawberry Hill Trust, and Nicholas Smith, Property Manager of Strawberry Hill House, for sharing their insight.
For information regarding opening hours, transport and facilities, please visit www.strawberryhillhouse.org.uk. The link for the database for the original Strawberry Hill Collection is www.library.yale.edu/Walpole.org

Books to read on Strawberry Hill
Strawberry Hill: Horace Walpole'sGothic Castleby Anna Chalcraft andJudith Viscardi is due to be published in June 2011 by Frances Lincoln Publishers. Described as ‘absorbing’ by London’s Evening Standard, it was written by two of the official guides working at the house.

Books to read on the Gothic Revival