Joan Miró: The Ladder of Escape 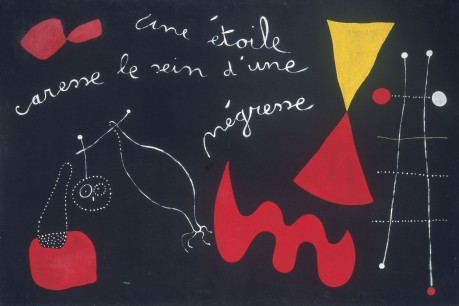 In Tate Modern, a star caresses the breast of a negress.   She is an hourglass, two touching triangles, and a sexually suggestive thick wavy line in fiery red. The star is only a word. White calligraphic lettering – the first line of the poem  ‘Une étoile caresse le sein d'une négresse’ – spreads out amorously against the black space, lending its rhythm to the slow escalation of sexual desire. The desire to escape, to reach the stars, is symbolized by one of Miró’s recurrent symbols, the ladder of escape, which appears on the right side of the painting.  ‘What counts is to bare your soul’, Miró said in 1936, ‘painting and poetry are done in the same way you make love; it’s an exchange of blood, a total embrace – without caution, without any thought of protecting yourself.’

This is the erotic Miró – and the crowd-pleaser. The painting-poem of 1938, from the Tate’s own collection, forms the centrepiece of this Retrospective, the first in London in nearly 50 years.  It reappears on the cover of exhibition catalogue, the visitors’ guide, and as a highly marketable image at the museum shop. And yet, the real emphasis of the exhibition lies in the lesser-known ‘other Miró’, as the formidable display of the ‘Barcelona Series’ running across the long wall opposite the negress indicates. A series of 50 black-and-white lithographs, completed between 1939 and 1944, densely filled with grotesque caricatures of tyrants and dictators, bold heads with sharp teeth, and the deformed, contorted limbs of their victims, reflects Miró’s anguished experience of the Spanish Civil War.

A selection of some of the darker Constellations (1940-1) in an adjoining room seems filled with anxiety. Their lyrical titles (Sunrise, Morning Star, The Passage of the Divine Bird) stand in sharp contrast to their unsettling imagery: spidery stars and birds with teeth fill the skies, snakes traverse the landscapes. In Woman and Bird and Women Encircled by the Flight of the Bird, the women are under threat by the toothed birds, bombers that fill the Spanish sky, as the display caption explains – a theme closely linked to The Flight of a Bird over the Plain in the previous room. This reading is perhaps too literal. Both exhibition and accompanying catalogue emphasize the politically engaged Miró and the claim that Miró was no less committed than his contemporaries (one of them being Picasso). Nonetheless, as the curators acknowledge, the Constellations epitomizes Miró’s conflict between political engagement and escape into creativity. Central among them is The Escape Ladder (1940), which lends the exhibition its title and central organizing theme. In his book on the Constellations, bringing together Miró’s gouaches and Breton’s poetic responses to them, Paul Hammond described it with unparalleled eloquence:

The right side of the picture, which is bisected by a rickety ladder and crescent moon, is populated by Ubuesque folk, scarecrows, their heads ‘empty’, their eyes wistful, and by spermatoid pictographs that shimmy. The left side is cluttered with two stiff-legged spiders/radiating mini-suns, accompanied by disks, inverted U shapes like down-turned mouths, by triangles and rectangles. A Loch Ness monster or mutant earthworm glides, unwriggling and non-plussed… Miró’s gossamer trolls, ersatz barrage balloons, ghost riders in the sky, float unmoored and uncomplaining. The one hermaphrodite potato-head who’s placed to set foot on the gaudy ladder of escape raises its hackles and hydra hands in alarm. The rungs are too flimsy, the ladder’s a pasteboard cutout.

On a number of occasions, Miró spoke of his paralyzing pessimism during the war and the desperate need to escape. (‘I felt a deep desire to escape. I closed myself within myself deliberately. The night, music and the stars began to play a major role in suggesting my paintings.’) This was anything but a flight into an ethereal realm of creativity. Miró also explained how this tortured withdrawal and inner anguish led eventually to a feeling of liberation: ‘When I was painting the Constellations I had the genuine feeling that I was working in secret, but it was a liberation for me in that I ceased thinking about the tragedy all around me’.  This ambiguity is lost in the straightforward didactic tone of some of the essays in the exhibition catalogue and their overly academicized titles, such as ‘The Civic Responsibility of the Artist’ (by Maria Luisa Lax), ‘Miró’s Commitment’ (by Robert S. Lubar), and ‘Forms of Commitment or Commitment without Form: The Other Miró’ (by Joan Minguet Batllori).

Admittedly, the ambiguity is difficult to sustain, as is the balance between a Retrospective, which implies comprehensiveness, and a thematic exhibition. The exhibition includes over 150 works – paintings, works on paper, and sculpture – arranged chronologically, following the linear logic of Retrospectives, to convey a sense of stylistic development from early representational works, such as The Farm (1921–2), which was owned and praised by Hemingway, to The Tilled Field and Catalan Landscape (The Hunter), marking the transition to Surrealism, Head of Catalan Peasant, with strong overtones of Catalan identity, as well as Dog Barking at the Moon (1926) and Landscape with Rooster (1927), where the ladder of escape reappears. In his essay in the exhibition catalogue, Christopher Green discusses the diversity of meanings expressed in the Catalan Peasant series, noting the oscillation (and contradiction) between the metaphysical and the political:

The Catalan Peasants, both as a mystical image carrying reverberations of the Kabbalic ‘Ancient One’ and as an image of pipe-smoking, guitar-playing vitality, connect directly with the mystical and the earthly in Miró, and so does the hidden political subtext.

The enormous diversity of Miró’s oeuvre is further conveyed by the inclusion of the extraordinary and bizarre oil-on-copper series (Nocturne, The Two Philosophers, Seated Personnages and Man and Woman in Front of a Pile of their own Excrement – the latter motivated by Rembrandt’s comment that it is possible to find rubies and emeralds in a pile of dung) and the ‘masonite’ paintings, both of which are discussed in the curators’ own essay in the catalogue, entitled ‘The Tipping Point: 1934–9’. The essay makes the central argument of this exhibition in a more nuanced way, with specific references and all the necessary disclaimers.

The oscillation between the retrospective and the thematic underlies the remarkable curatorial feat of bringing together for the first time all five of Miró’s vast triptychs: Blue I, II, III (1961) and Mural Paintings I, II, III (1962), inspired by American Expressionism, and displayed in a specially constructed octagonal room to allow for a complete immersion in their vibrant colour. The same format of display is followed in the very different case of the two politicized triptychs, leaving it to the Press Release and the exhibition guide to make the case for the ‘vibrant and immersive environment’ of the former as opposed to the ‘insular space with a sense of isolation’ of the latter. Cell of a Recluse I, II, III (1968) registers the trace of a faint black line against vast white canvases, and The Hope of a Condemned Man I, II, III (1974), in which a bolder black line turns itself into an elliptical outline, with an explicit reference to the execution of the Catalan anarchist Salvador Puig Antich. In the same year, at the age of 81, Miró experimented with splashing black paint on large white canvases to create Fireworks I, II, III (1974). These three tightly assembled large canvases that hang across the wall of the final room, the very last visual impression we are left with upon leaving the exhibition, capture, according to the exhibition guide, ‘the tireless energy of creativity, the challenge to making art and even the eventual collapse of the Franco regime’.

are apparitions par excellence…they are signs from heaven, yet artifactual, an ominous warning, a script that flashes up, vanishes, and indeed cannot be read for its meaning.

A reminder perhaps of the dangers of reading too much into art, but also of the significance of maintaining the uncertain flash of the dialectical play of contradictions

Buy the catalogue from Amazon

Joan Miró (1893-1983) retained a strong sense of Catalan identity, evident in his dense repertory of symbols and themes. His enormous and diverse oeuvre comprises paintings, works on paper, sculpture, assemblages, collages, ceramics and murals, ranging from early representational works to highly abstract ones, registering the influence of both Cubism and Surrealism. Famously claiming that his paintings in the 1920s arose from hunger-induced hallucinations, Miró drew upon automatism and the resources of the unconscious and was described by the Surrealist, André Breton as ‘the most Surrealist of us all’ but eventually broke with Surrealism and continued his experimentation. He developed a distinctive visual language of biomorphic shapes, sexual allusion, cosmic symbols and poetic metaphors.

Joan Miró: The Ladder of Escape, edited by  Marco Daniel and Matthew Gale, is published by  Tate Publishing, London 2011.