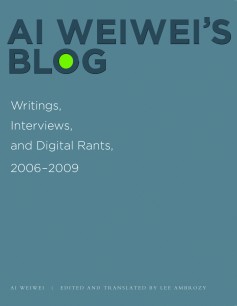 A promotion on behalf of MIT Press

Ai Weiwei, China’s most famous artist and activist, was recently released after 3 months’ detention by Chinese authorities. A constant thorn in China’s side, in recent years Ai has played the role of ‘dissident’ (a term he eschews) through both blogging and his use of Twitter.

This book offers a collection of Ai’s notorious online writings – culled from his popular blog, shut down by Chinese authorities in 2009 – translated into English. Capturing Ai’s hubris, righteous anger and vision for China, it is the most complete public documentation of the original blog available in any language.

‘There are those, even within the art world, who have viewed Ai with suspicion and regarded him as an opportunist. If anyone doubts his seriousness and sincerity, I suggest they read the English translations of the blogs he posted between 2006 and 2009, when his site was closed down by the Chinese authorities and its contents deleted from cyberspace. Many of these 2,700 posts have now been retrieved andtranslated into English, in a fascinating and frequently very moving book just published by MIT.’ Adrian Searle, The Guardian

‘This collection of blog posts, put out with superb coincidental timing, makes plain that Ai is much more than the playful, somewhat exhibitionist dilettante of Chinese art he sometimes seems. His posts go to the heart of moral and ethical fault lines running through his country, raising issues that China boosters in the west prefer to sidestep.’ Jonathan Fenby, The Observer

‘Blogging produces reality rather than simply representing it. Ai Weiwei is among our very best guides to this new terrain: one of the greatest living international artists and a fighter for more freedom. Ai Weiwei’s daily blog entries, gathered here, will make the reader see the world in a different and startlingly originallight.’ Hans-Ulrich Obrist

Ai Weiwei (b. 1957), artist, architect, activist, and outspoken social critic, is one of the most famous and controversial figures in China today. His work has been exhibited in Europe, Asia, Australia, and the United States, in venues ranging from the Venice Biennale to the Guangzhou Triennial. Lee Ambrozy is a translator and scholar of Chinese art history.