Cotman, Crome and the Norwich School 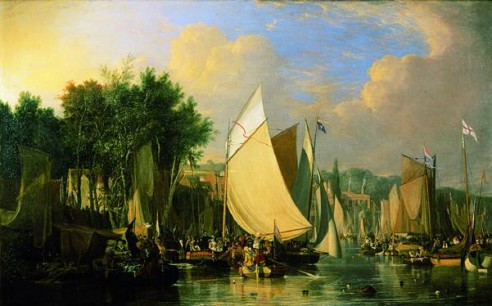 Sue Eccleston delights in the overlooked works of the Norwich School

As England’s second city, 18th-century Norwich was a hive of cultural activity with many clubs and societies. Then, in 1803, a group of artists and amateurs formed the Norwich Society of Artists, with regular meetings and exhibitions drawing together painters from across the region. The Society survived until 1833, and during that period it established the reputation of a number of (largely) landscape artists, the most well known being John Crome and John Sell Cotman. Through friendships, master-pupil relationships and family connections, this close-knit group of provincial artists became known as the Norwich School. While the Society floundered in 1833, the ‘School’ continued to paint the Norfolk landscape for three generations. While many of their works are scattered across museums and galleries all over the world, the largest collection resides in Norwich Castle Museum in the heart of the city where it all began.

There are two galleries dedicated to the works of the Norwich School in the Castle Museum but, given that so many artists were associated with the group, it represents a small fraction of their output. Nonetheless, the works on show are representative of the varied subjects and styles of this provincial group. Unlike their contemporary landscapist John Constable, the artists associated with the Norwich School were mostly born into families of modest means. Where Constable was able to pursue his painting career while maintained financially by his father, the Norfolk artists struggled to support themselves with their painting by becoming drawing masters. This did not, however, stop them from rivalling Constable’s talent. In 1802 Andrew Robertson, a friend of Constable and an artist himself, exclaimed that Cotman was, along with Turner and Girtin, ‘one of the leading watercolourists of the day’.

The son of a haberdasher, John Sell Cotman struggled financially all his life and, like others of the Norwich school, taught drawing as a way of supporting himself and his family. This did not stop him travelling extensively around England and to France. The Cotman Gallery in Norwich Castle houses a sympathetically displayed selection of Cotman’s watercolours alongside reproductions of interesting letters between him, his family and friends. The collection allows the viewer to follow the development of Cotman’s watercolour technique from his early works, using pencil and watercolour, which produced a dark brown and indigo wash as seen in Bishopsgate Bridge, Norwich c. 1800, to the works he produced in Yorkshire, notably Greta Bridge, Yorkshire, 1810, where his technique moved to fluid washes of pinks, greens and siennas. These paintings placed Cotman among the great watercolourists of the period. Furthermore, Cotman was also accomplished in oils: Normandy River c. 1824–8 shows the influence of Claude Lorrain and Poussin in his work.

The larger central area of the Cotman Gallery houses works by Cotman’s sons Miles Edmund Cotman and John Joseph Cotman, the second generation of the Norwich School. Like their father, both sons worked in oils and watercolour, but whereas Cotman père did his most accomplished work in watercolour, his sons worked predominantly in oils, capturing the subjects most often depicted by the Norwich school: the surrounding countryside and the waterways. Boats on the Medway, c. 1845 by Miles Edmund Cotman is reminiscent of Joseph Stannard’s Thorpe Water Frolic – Afternoon, 1824–5.  Both are rich, moody river scenes full of wind-filled canvas and shimmering water. Notably, M.E. Cotman’s scene has a calm and luminosity not marked in the Stannard. This heightened sense of colour is also evident in his brother John Joseph Cotman’s much later work, Trowse Meadows, Norwich, c. 1860, a composition typical of this artist’s work: leafy country scenes containing solitary figures.

The Crome Gallery consists of a wide, outer corridor gallery that encircles a large inner gallery. This central room contains what I consider to be the highlights of the Norwich School collection. Although the Norwich School are best known for paintings of the Norfolk landscape, it would be a mistake to think that this was the limit of their oeuvre. The close association Norwich had with the continent meant that many of the artists travelled widely in Europe. In 1814, John Crome went to France and studied in the Louvre, and the result of this experience shows in his large canvas Boulevard des Italiens 1814–15. In addition, the impact of Dutch art on the Norwich school is evident throughout the works, and Crome’s Grove Scene c. 1820 is undoubtedly influenced by the great 17th-century Dutch landscape artist Meindert Hobbema (1638–1709).

Some of the largest and most prepossessing paintings produced by the Norwich Artists hang in the Crome Gallery and deserve at least as much, if not more, attention than the works of Crome himself. Trowse Meadows near Norwich, 1828, by George Vincent (one of Crome’s pupils), is a wonderful composition of a picturesque harvest scene that seizes the eye and draws the viewer into the narrative. Despite coming to the notice of distinguished collectors with his talent, Vincent suffered imprisonment in the Fleet prison for debt. Success in London exhibitions did nothing to help his financial situation and he died penniless at the age of thirty-six, leaving works such as Dutch Fair on Yarmouth Beach (1821) and A Distant View of Pevensey Bay, the Landing Place of King William the Conqueror (1824) as a tantalising glimpse of what he may have achieved had he survived.

Another who would surely have realized higher status but for an early death, was Joseph Stannard, a pupil of Crome’s contemporary, Robert Ladbrooke. Stannard’s Thorpe Water Frolic – Afternoon, 1824–5, is a painting of technical mastery thatcaptures one of a series of water frolics at Thorpe Lodge. This skilled use of oils and the resulting effects of light and detail are also evident in Stannard’s atmospheric Yarmouth Sands 1829. Stannard was not the only talented artist in his family: his wife, his brother Alfred and niece Eloise Harriet Stannard were all accomplished painters and some of their works hang in the gallery. Stannard’s wife, Emily Coppin Stannard, was an award-winning painter of still life, producing works that demonstrate just how influenced Norwich artists were by their historical ties and close proximity to Holland.

It is annoying that the viewing of such a large, interestingly composed and accomplished painting as Still Life – Dead Ducks and a Hare with Basket and a Sprig of Holly, 1853 by Emily Coppin Stannard is hampered by its hanging in the confined space of the outer corridor of the Crome gallery. This is also the case with other paintings by the female members of the Norwich School, which seems to reflect the lack of attention the women get whenever this group of artists are discussed. I am pleased to say that Norwich Castle will be addressing this issue when the galleries are reorganized in April 2012. Every visitor should allow some time to take in the works of the female artists of the Norwich School.

Both the galleries display art works depicting the countryside, cityscapes and waterways that still exist in Norwich and the surrounding areas today. This makes any visit to the Castle Museum an enhancement to an appreciation of how the area has evolved. Paintings of Yarmouth Jetty, Cromer, Mousehold Heath, the River Yare, Norwich Castle and Cathedral, hang alongside those of other Norwich sites: the market place, Cow Tower, Kett’s Castle and Bishopsgate Bridge: all places the viewer can still visit today.

Finally, it is worth questioning why the artists of the Norwich School have never achieved the reputation that other English landscapists, such as Constable and Turner, realized: a question you will surely ask yourself once you have visited Norwich Castle. In part, the answer may lie in how Norwich Castle came to have such a large collection of paintings in the first place. Jeremiah James Colman, founder of Colman’s Mustard in Norwich, bequeathed most of the works to the galleries, stipulating that they were not to leave Norwich. This has resulted in lack of exposure for the Norwich School and, despite a handful of publications on the artists and some excellent photographs of their paintings available via the castle website, there is no substitute for getting up close and personal to the works themselves, to appreciate why these paintings can hold their own against those of Constable.

The next few months are a good time to take your first look over the pieces I have mentioned, as the galleries will be reorganized in April 2012. You are then urged to make a second visit, as some paintings currently in storage will be installed as part of the re-hang. In addition, the curators are planning to install interactive touchscreen computers offering a wealth of information about the works and adding some historical context to these much-overlooked paintings. Norwich Castle has so much to offer any visitor, but the hidden gem in this former royal palace is surely its outstanding collection of work by the Norwich School.

Norwich, situated as it is in the heart of East Anglia, was until the middle of the 19th century, England’s second city (after London). This affluent past is evident in its splendid architecture particularly the 11th Century Cathedral, the flinted Guildhall and the timbered Stranger’s Hall. However, the dominant building in the centre of Norwich is the Norman Castle. Built in French limestone, the castle was intended for a Royal Palace rather than a fortification, though no Norman king ever took up residence. Indeed for hundreds of years the castle was the county gaol. Since 1894 the Castle has housed a museum and art gallery, demonstrating the rich cultural past of Norwich and the surrounding areas. Visitors to the castle are faced with a wealth of viewing options: as well as the keep with dungeons and battlements, the Castle galleries include Decorative Arts, Natural History and a vast collection of Teapots, which along with the Anglo-Saxon, Viking, Boudicca, and Egyptian galleries provide something for all ages. However, the hidden gem in the castle’s crown is its outstanding collection of paintings notably the largest collection of works by the Norwich School of Artists.