A treasure trove from Java displayed at Yale 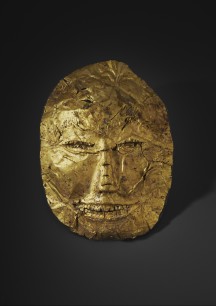 ‘Old Javanese Gold: The Collection of Hunter Thompson’ is on view now until 14 August at the Yale University Art Gallery in New Haven, Connecticut. Here are approximately200 gold objects made on the island of Java in the early centuries of the first millennium AD when Indonesia was a centre for trade. The elements reveal the skill and artistry of their makers and provide insight into numerous aspects of Javanese society. The elements in the Hunter Thompson collection represent the earliest materials in the department’s holdings. The entire collection comprises approximately 450 gold objects – coins, jewellery, statues, and ritual objects – from Central and East Java, donated to the Gallery by Hunter and Valerie Thompson, and dating mainly from the eighth to the thirteenth centuries but also including some prehistoric material.

Donations of significant cultural material are always exceptional and in this instance have proven pivotal to the development of our knowledge of this area. With this in mind I was fortunate to speak with Hunter Thompson about his gift to Yale and how he had originally become interested in this area.

Thompson’s career as an investment adviser first brought him to Southeast Asia in 1974. On a trip in 1980 he stayed at the Hilton Hotel in Singapore where he read an article in the hotel’s magazine about Indonesian textiles. He was intrigued and called the Indonesian embassy for a referral to a dealer. As a result, Thompson began to buy textiles until the supply dried up, owing mainly to the limited quantity available in the aftermath of the Second World War. The dealer he had been working with decided to enter the real estate business and needed some money for this new venture. As a result, Thompson was offered the opportunity to buy some small gold objects from Java. This was the beginning of the collection.

At that time there were no rules or laws about the disposition of cultural property and as farmers and others discovered these small gold objects buried in their fields they either sold them or melted them down to reuse the gold.  At the time Indonesia had no treaty with UNESCO, whereas now if something is discovered it must be sold to the state. All the elements in the collection were purchased outside Java at auction and through dealers, Hunter Thompson assured me.

Over the next ten years a number of events took place to advance scholarship in the area of old Javanese gold and precious metals in Southeast Asia.  In 1987 the Asian Museum in Singapore mounted an exhibition that included some of the Thompson collection.  Through his collecting and interest in this area, Thompson had met John Miksic, an expert in Javanese gold, and in 1990 Professor Miksic published the first edition of the catalogue that accompanies the current exhibition at Yale. While it initially documented this important private collection, it also included essays on the role held by gold objects in Medieval Java.  This volume became the definitive reference guide until its current reissuance with updated and expanded information on new advances in the field over the past 20 years.

In 1995 an exhibition was mounted at the Tropenmuseum which consisted primarily of elements from the Hunter Thompson Collection.  In lending the collection and encountering various cross-border issues, Thompson began to think about its final disposition and started to pursue this with greater urgency.

Thompson wanted the collection to be used to increase awareness of art and sculpture in Southeast Asia. It was not acceptable that the collection be stored away from public view, only used partially or deaccessioned.  Yale approached him through a mutual connection and eventually the parties came to an agreement. Thompson noted that the whole collection will be viewable on the Internet and that there are no copyright restrictions or fees to use the images. It is truly ‘all access’ as he had envisioned. It was also attractive that the Yale University Art Gallery is currently undergoing a $78 million renovation, thus further improving their already superb gallery spaces and educational facilities.

Through the generosity of Yale alumnus Thomas Jaffe, the Department of Indo-Pacific Art was founded in 2009 and the department chair endowed. It is the newest department at the Gallery, with the founding collections holding about 1,700 objects. In addition to the Javanese Gold, the other areas of strength are ethnographic sculpture and Indonesian textiles. Highlights of the collection include a group of ethnographic carvings—ancestral sculpture, ceremonial objects, and architectural components from Indonesia, the Philippines, the aborigines of Taiwan, and mainland Southeast Asia—from the collection of Thomas Jaffe. The department also holds about 600 textiles from Indonesia, mainly collected by Robert Holmgren and Anita Spertus. This collection is regarded as being of exceptional quality, its particular strength being textiles from South Sumatra. It also includes rare and unique weavings from Sulawesi and Lombok, which reflect the history of Indonesian designs.

The exhibition itself is well laid out yet compact in its presentation. There is the sensation of being bathed in golden light as one examines the contents of the cases. One of the central elements in the exhibition is a Gold Javanese  Crown Top  or  Unisha Cover  dated 650–1000 AD (see lightbox above). It is tall and more conical in shape than a similar  Unisha  in the collection of the Houston Museum of Fine Arts, originally part of the Alfred C. Glassell Jr bequest. Hunter Thompson’s opinion is that it is an object made to be worn by a royal person, most likely a younger person. He notes that with the small holes present on the lower rim it seems meant to have been worn on the head and tied under the chin. The wearer would have had to gather their hair up and place it in and under the crown. Thompson questions the suitability of the crystal filial as these were often only included with burial pieces.

A charming and poetic element is contributed by the ‘bird rings’. These are small gold objects that usually incorporate a precious stone as part of the design. While their name suggests they were made to be placed on the legs of pet birds, it is more likely that they were used to adorn human ears, or used as hair ornaments.

A very rare funerary mask is on view (see lightbox above). It is spectacular in its superb condition and in the facial expression it presents. These masks are not widely present in other collections and this example is noteworthy for its completeness and the curious horizontal marks on the nose, which are not seen in other examples.

This presentation of significant and rare material unlocks the door to a new and relatively unexplored world of artistic and cultural scholarship. It is a transporting experience. Fortunately it is well documented through the accompanying catalogue and presumably through the eventual publication of the papers presented at a recent symposium. We have a lot to look forward to as this area develops!

The Hunter Thompson Collection is one of the founding donations to the Yale University Art Gallery’s new Department of Indo-Pacific Art and the exhibition is accompanied by an updated edition of the 1990 publication Old Javanese Gold by John Miksic, Associate Professor, Southeast Asian Studies Program at the National University of Singapore.
Wonderfully curated by Ruth Barnes, the inaugural Thomas Jaffe Curator of Indo-Pacific Art and previously textile curator at the Ashmolean Museum, the exhibition has been supported by a symposium, ‘Gold in Southeast Asia’, which was held at Yale in May 2011.Additionally, the Andrew Carnduff Ritchie Lecture,‘Javanese Gold Illuminated: Gold’s Associations in Ancient Javanese Culture’, wasdelivered by Professor Miksic. It is hoped that the resulting papers will be published, as was done in 1999 to document the contributions to a seminar organized in 1996 by the National Museum in Jakarta and the Tropenmuseum, the Netherlands in a volume entitled Precious Metals in Early South East Asia.