Into Arcadia with Twombly and Poussin 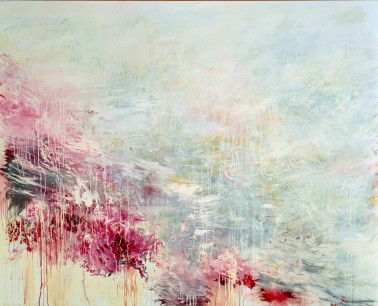 Once again London’s Dulwich Picture Gallery proves itself one of Britain’s most exciting visual arts spaces with a summer show that juxtaposes the contemporary artist Cy Twombly (1928–2011) with the seventeenth-century painter Nicolas Poussin (1594–1665).   Until his death in early July, Twombly had the distinction of being the world’s highest-paid living artist, but many would struggle find the link between his idiosyncratic daubs and scribbles and Poussin’s clear, ordered vision.

Fledged in the avant-garde art scene of 1950s New York alongside Rothko, Pollock, de Kooning and Barnett Newman, Twombly went on to study at Black Mountain liberal arts college which famously challenged distinctions between painting, literature, sculpture, music and dance.  Twombly was soon questioning the anti-figurative aesthetic of abstract expressionism and in 1957 he settled in Rome to explore a more narrative approach to art, rooted in European humanism.  Despite the three centuries that separate them, both Twombly and Poussin were foreigners who chose to inhabit the Eternal City – Poussin from northern France, Twombly from the southern States; both found their inspiration in classical culture; both were fascinated by the Roman landscape and both returned repeatedly to the theme of Arcadia – an idealized, imaginary, pastoral past. There the similarities end, though Twombly, in an interview for Tate Modern’s 2008 exhibition of his work, mentioned that he would like to have been Poussin, ‘if I’d had a choice, in another time’.

Though this comment might appear to be shameless piggy-backing on the reputation of an undisputed master, it does, in fact, provide some insight into Twombly’s creative process.  While Poussin needs no introduction, Twombly still perplexes and the Dulwich show is clearly designed to elucidate his work.  Twombly famously trained as a cryptographer in the American army; this, plus an early flirtation with Surrealist automatic writing helps explain his penchant for cryptic symbols, numbers, letters, words and phrases.  Iconography, metaphor and myth infuse his works, creating a complex web of visual and verbal allusions.

The exhibition begins with two  Untitled  Twomblys, flanking Poussin’s Landscape with Travellers Resting.  In the Twombly panels, diagonal slashes separate swirling sky-pink swathes from heavy earth-green bases, suggesting the  plein air  landscapes of nineteenth-century Impressionists while evoking the classical setting of the Poussin between them.  In the same room Poussin’s  Arcadian Shepherds  is paired with Twombly’s  Arcadia  in which the letters ARCADIA emerge from a chaos of pink, blue and green scribbles.  While easily dismissed as the doodles of a con-man, on consideration few would not find some more profound references: an image of graffiti scratched into ancient marble, an evocation of the vagaries of memory or the slow obscuring veils of death, or indeed an expression of the human impulse to leave a mark – to carve initials on a wall…

Twombly’s sculptures are equally confounding; casual assemblages of ‘found art’, they linger in the memory.   Pasargade  (1994), a rustic, white-painted pyramid of wood and stone, suggests a funerary monument while its title evokes Pasagardae, the ruined city of the Persian emperor Cyrus the Great.  Cycnus,  also painted a sepulchral white, presents a palm frond rising from a wooden block.  While the title alludes to various mythical characters transformed into swans after violent deaths, the image itself suggests something less tangible: spirit rising from an earthly tether.

The section entitled Anxiety and Theatricality is perhaps the most challenging; here a preparatory study for Poussin’s  Joshua’s Victory over the Amorites  conveys a dense battle scene ordered with a jagged rhythm.  The same could probably be said of Twombly’s two  Untitled  pencil sketches. The catalogue describes them as ‘unmediated… calligraphic all-over drawings’, which ‘make interiority manifest by transcribing it directly onto the page’; many might, however, see these simply as gold-framed scribbles.   Less controversial is Twombly’s  Hero and Leander,  a ravishing oil which riffs on doomed lovers of classical mythology: Hero, who each night guided her beloved Leander across the Hellespont till he drowned in a sudden storm and she threw herself in after him.  Churning with all the drama implicit in the tale, the painting presents a small corner of dripping corporeal reds gradually absorbed into an annihilating cloak of white.  One is tempted to an autobiographical reading of the work with Twombly, like Hero, attempting to span the gulf between two continents – in his case the old world of Greco-Roman traditions and the new world of amnesiac modernism.

Any question about Twombly’s stature, however, is silenced by the final room which contain the staggering  Quattro Stagioni  (A Painting in Four Parts).  Unmediated by reference to Poussin except  in caption-sized reproductions, the four paintings that make up this work are extraordinarily powerful.  Primavera  stretches upwards with dazzling exuberance, Estate drips with sensuous languor,  Autunno  is heavy with indolent fruition while  Hiverno  exudes a heavy, anxious stillness.   Created when Twombly was in his mid sixties, these works have a spiritual grandeur lacking in some of his earlier bravura pieces.  References to Stravinsky’s  Rite of Spring  and Botticelli’s Primavera, to the poetry of Keats and Rilke, Virgil and Spenser add layers of richness, but no knowledge of Classical, Renaissance or early modern culture is necessary to appreciate the grace and gravity of this magnificent quartet.  A poignant meditation on landscape and time, on myth and history, on art and literature, on personal and collective memory, the  Quattro Stagioni  should convince any lingering sceptics.

The catalogue, edited by Nicholas Cullinan, Tate Modern’s curator of international modern art, explains the classical allusions and provides relevant biographical details, but once one has accepted Twombly’s quirky vocabulary the works essentially speak for themselves.

‘Twombly And Poussin: Arcadian Painters’ is at  Dulwich Picture Gallery until 25 September 2011.  The catalogue is edited by Nicholas Cullinam and published by Paul Holberton Publishing, 2011.
We reported  Cy Twombly’s death in our July issue.