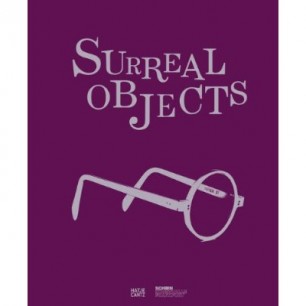 I. Pfeiffer and M. Hollein (eds)

The recent torrent of exhibitions, catalogues, articles and biographies relating to Surrealism might leave one wondering if there is anything more to say on the subject. Yet Surreal Objects (an exhibition catalogue for a recent German exhibition) does stray into new territory by being devoted entirely to altered objects, assemblages and traditionally carved and cast sculpture made by Surrealists, as well as Readymades (‘found objects’ that an artist designates as art).

The friction between the subversion of materialistic consumption and the production of delightful art objects and pleasurable spectacles has a particular resonance in our own time. The glib vacancy of some Surrealist pieces is a depressing precursor to the empty gestures of some artists who followed. Surrealist objects exemplify the twin drives of poetry and provocation at the core of the movement. The poet Louis Aragon so objected to a Dalí assemblage containing a glass of milk (Aragon thought the milk should have been given to proletariat children rather than wasted on art) that it precipitated his leaving the Surrealists in favour of the Communists.

An essay on the ‘Surrealist Exhibition of Objects’exhibition of 1936, held in Paris, is an important source of information on a landmark display of both Surrealist objects and objects venerated by the Surrealists. Many of the major Surrealists did not show any work there, and the short-lived display was dominated by peripheral artists, though Meret Oppenheim’s  Breakfast in Fur (1936) – a cup, saucer and teaspoon covered with fur – made its debut there. Pieces by 33 artists were packed into an ethnographic-art showroom for a mere seven days in the only exhibition devoted solely to Surrealism and sculpture during the movement’s heyday. The essay footnotes will help later researchers.

Wolfgang Paalen’s pistol made of bones, Marcel Marïen’s one-eye spectacle and Dalí’s lobster telephone have élan and wit. Leonor Fini’s corset chair should be a design classic alongside Dalí’s Mae West Lips Sofa (1937). It looks as stylish and uncomfortable as a corset itself. Mimi Parent’s whip of two real blond pigtails deserves to be an icon of Surrealism. Many examples exist only as photographs, the originals having been dismantled, lost or destroyed (artists who were in the hands of canny dealers sanctioned later reconstructions of signature works in limited editions). Many of the surviving works have probably never been reproduced in colour before. Some of the art looks rather weak now, not helped by dramatic deterioration of the everyday materials employed in its construction. En masse there is a degree of repetition: Maurice Henry wrapped objects in bandages, numerous artists coated objects in strongly tactile materials (fur, feathers, sponges) and so on. Surrealists were not immune to slipping into formulae, as artists of all periods and styles may do.

All the main movers in the Surrealist scene (including André Breton, Giacometti and Picasso) are included, and there are a number of surprises. The first is that Meret Oppenheim emerges as much more than a single-work artist. Six, largely successful, sculptures (and photographs of others) demonstrate that. The second is that Man Ray was a prolific and inventive maker of objects (some of them very complex), not just a chronicler of others’ sculpture in documentary photographs. The third is the introduction to a host of lesser-known artists. A section of brief biographies of artists is extremely useful, as some of these individuals are relatively little known.

Although some artists are under-represented (Magritte, for example; Joan Miró is, unforgivably, omitted entirely), in the main the selection is broad and ambitious. The essays are generally short and to the point, though more attention could have been paid to the critical roles that Giacometti and Dalí played in the development of Surrealist objects. Some of the exhibition shots are disappointingly small, making it hard to distinguish items. One of the most compellingly alluring and repulsive sculptures (a stuffed fabric figure by Dorothea Tanning, now owned by the Tate Gallery) is a two-page illustration disrupted by the book gutter. The use of burgundy velveteen on the covers is a fitting touch for this informative and diverting book on Surrealism.

This publication is especially timely. Much of the revival of interest in Surrealism has come about because of contemporary artists’ use of Surrealist tactics (sometimes at second- or third-hand), and these artists mainly work in sculpture or installation design. The direct influence that Surrealism has had on art today is mostly in the field of three-dimensional art. The art of Robert Gober, Charles Ray, Sarah Lucas and others would be unthinkable without the precedents of Man Ray, Wolfgang Paalen and Joseph Cornell. And Breakfast in Fur is a template on which artists today have built whole careers.