Constable and the nature of painting 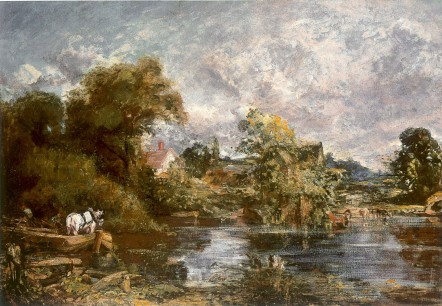 Two new publications on Constable and an international touring exhibition

As any visitor to England's picture galleries can attest, as a national landscapist Constable is well represented. Drawings, sketches, paintings and prints are robustly displayed at the National Gallery, Royal Academy, Tate Britain, and regional venues across the country. East Bergholt – in the Stour Valley between Flatford Mill and Langham – is among the most cherished villages that Constable depicted, an area that, from 1832, was called ‘Constable’s Country’ and remains, even today, associated with the artist’s ‘personal geography.’

Over the past 15 years, exhibitions, television programmes and media events have extended this notion by affirming the relationship between Constable's depictions of England and modern viewers’ interest in them. The National Gallery exhibition ‘At Home with Constable’s Cornfield’ (1996) and ‘The Uses of an Artist: Constable in Constable Country Now’ at Ipswich (1998) as well as television events such as the BBC’s‘A Picture of Britain: An Inspirational Journey Through Art, Landscape and Identity’ (2005) and a Constable ‘draw-in’ staged by Rolf Harris on Trafalgar Square (2004) have demonstrated this connection between landscape, Constable’s depictions of it, and our understanding of both.

Nonetheless, there was much of interest to Constable beyond his favorite subject, that is, the ‘scenes of his boyhood.’  Theoretically and technically, Constable developed his own approach to painting wherein he combined scientific observation and accurate depiction with sentiment and feeling as the means through which his art could express emotion. Hetranslated nature through observation and direct sketching that rendered specific locales and cloud studies. He pushed the practice of painting outdoors by roughing out full-scale sketches and using large canvases, treating landscape on the scale of history painting (then regarded as the highest form of art), while also muddying the definitions of sketch and study.

Shifting from biography and subject to process, ‘John Constable: Oil Sketches from the Victoria and Albert Museum’ is an exhibition and catalogue prepared by Mark Evans, Nicola Costaras, and Clare Richardson.  Both show and book offer insight into Constable’s working process detailed by the oil sketches, watercolours, and drawings. The show and catalogue are dedicated to Graham Reynolds, former Keeper of Prints and Drawings at the V&A, who made Constable studies his life’s work. The exhibition is on view in Europe and the United States prior to the return and display of the works at their home institution in 2013 [see Editor’s note to right].

Two essays addressing Constable’s oil sketches and their place in the 20th century, as well as Constable’s approach to the production of the oil sketch, foreground the catalogue entries. The middle third of the catalogue is devoted to 85 entries covering seven periods of Constable’s life from 1800 through his final years. In addition to object label descriptions, each figure refers to one or more of the 95 primary, secondary or exhibition resources in the bibliography. The third section of the catalogue is devoted to technical observations that reveal how the vivid colours and impasto brushwork revealed themselves through cleaning. Here, discussion focuses on supports for sketches, re-use of canvas, and preparatory layers (also called ‘grounds’). Overall, the works reveal information about Constable’s working process and the transition from sketch to full-size, finished work. Readers are also afforded evidence of working process from rapid pencil studies to finished drawings and watercolors, from oil sketches to finished exhibition paintings. For example, Constable’s depiction of the opening of Waterloo Bridge had the most complex and protracted gestation, with the creation of pencil, ink and oil studies and both half and full-scale sketches made over a 12-year period. Constable’s interest in clouds and skies comes through here, again, as he took up analytical studies of these subjects at Hampstead, among many other locales.

The message that comes through from both the publication and exhibition of the oil sketches is that these works afforded Constable the opportunity to paint as he wished, free from the constraints of public expectations. In this way, the sketches offer us the opportunity to see Constable ‘unplugged’ and behind the scenes as he experimented with coloured grounds (for example, evidenced in the highly textured, pink ground of Waterloo Bridge).

Jonathan Clarkson’s monograph, simply titled Constable,  does assume rather more prior knowledge on the part of the reader than does the V&A’s catalogue. Thorough in his address of the formal and contextual elements of Constable's paintings, Clarkson approaches Constable's oeuvre through the objects before considering theories that enable us to explicate the paintings and, possibly, reveal intent, meaning, and interpretation. Further, the author cites and takes issue with scholarly approaches to Constable (here, referring to research by John Barrell, Ann Bermingham, and Michael Rosenthal) that demonstrate the close link between Constable's paintings and the political and economic contexts. Clarkson calls for a reconsideration of the relationship between biography and work, pointing out that simply because Constable was conservative politically need not indicate that he was artistically conservative also. Clarkson states that Constable challenged the place of landscape painting, promoted the practice of painting outdoors, muddied the definitions of sketch and study, and brought spontaneity and subjectivity to painting.

What makes Clarkson’s monograph particularly appealing to both the scholar and general reader is the care with which he emphasizes Constable’s originality and achievement. For example, he compares the approach to nature of the 17th-century painter Claude Lorrain (1600–82) and the use, in the 18th and 19th centuries, of the convex ‘Claude glass’ (or ‘black mirror’) to produce conventionally beautiful views. To Clarkson, Constable internalized that process by projecting the scene before him through the prism of his temperament. Moreover, Clarkson intentionalizes the path that Constable pursued by claiming that his non-academic style of drawing is early evidence of artistic independence.

Clarkson makes interesting observations. For example he states that by signing the landscape, Constable makes a claim to owning it. He also identifies reasons as to why Constable depicted clouds, as opposed to clear skies: first, the pragmatic reason, such that clouds could become preparation for paintings; second, the scientific interest in meteorological subjects; third, the theological reason, such that the study of nature led to the worship of God. For Constable this meant taking cues from Reverend William Paley whose commentary on the physical world provided evidence of God’s design and His character.

Nine chapters address Constable’s life and art from his youth in East Bergholt, through his artistic development to his later bereavement when his beloved wife Maria died, and professional recognition. He also considers the artist’s posthumous reputation. Clarkson skilfully weaves together primary documents, recent scholarship on Constable’s cloud studies, and close readings of several works, including the ‘six-footer’ oil paintings. Each chapter and its discussion are supported by a chronology of Constable’s life and the works he produced, as well as historical events during his lifetime, and 35 biographical notes on key artists, authors and scientists whose works affected Constable’s development directly or indirectly; a brief glossary of artistic terms from ‘associationism’ to ‘sublime’, a brief bibliography for each chapter and an index.

BUY Constable: Oil Sketches from the V&A FROM AMAZON