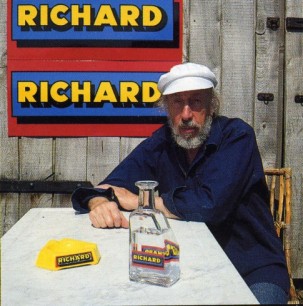 A tribute to the artist, who died recently, by Kim Tyler

I look over there. It is indeed ‘the man’ going about his daily business, visiting the chemist in his local town. I find myself in an instant at a disadvantage. Do I go up to him, tap him on the shoulder, say ‘Mr Hamilton, I know you said you couldn’t meet with me but, look I’m not stalking you this is purely coincidence’ or just observe the niceties and leave him to buy his toiletries, an artistic voyeur cowed by conformity?

When I was 16 Duchamp loomed large, I was a Duchamp groupie at Jacob Kramer art college in Leeds in 1973, interested also in Cage and chance, and it was chance that led to Hamilton’s book Collected Words, which I purchased while there and which has followed me around ever since. In 2003 I started a post-graduate research project ‘Richard Hamilton a “multi-elusive” artist of the modern world?’

In his autobiography David Hockney remembers receiving a prize for his painting from Hamilton while still at the Royal College of Art. ‘Richard was quite a boost for students; we felt, oh, it is right what I’m doing, it is an interesting thing and I should do it’. It should be noted how many of the alumni of Kings in Newcastle, who studied during his tenure there, are currently or have recently been at the pinnacle of art education in Britain.

Hamilton was not necessarily a particularly British artist in attitude and style. He might have been attracted to the images of American consumer culture as they appeared to tantalize a generation in the 1950s, but he was more in keeping with the European reverence for the intellectual.

This is Tomorrow, his poster, apparently Pop art before ‘Pop Art’, for all the world an example of a movement which didn’t exist, an icon of the moment predicting a style for the time. Clearly, defining Hamilton as the founder or father or grandfather of British Pop diminishes him in as much as it focuses on a minor  element in his work. His preoccupation with mass culture was only one aspect of his consuming obsession with the modern –modern living, modern technology, modern equipment, modern communications, modern materials, modern processes, modern attitudes, and modern politics.

Hamilton was always an artist very assured in stating his own case about the theoretical and intellectual aspects of both his own work and that of others. Duchamp returned to Europe with the Tate’s ‘The Almost Complete Works of Marcel Duchamp’ (1966), which included Hamilton’s remaking of Duchamp’s Large Glass (The Bride Stripped Bare by her Bachelors, Even) for a British audience, a European audience, a World audience, since the original had been hidden in Philadelphia. How does an artist so sure of his own identity subsume himself in the legacy of another? Working with others is a strong thread, needs a strong head, personal integrity.

Hamilton collaborated with artists (Deiter Roth) in projects covering a wide spread of media and was intimately involved with curating and writing about others. He claimed that ‘nice as it is to see real works of art, nowadays I think catalogues are more important than exhibitions. The value of catalogues is really greater that the occasion which generates them. They survive longer too’. His obsession with the work of Duchamp and James Joyce resulted not in pastiche but in a personal strategy acknowledging their intellectual legacy, showing that conventions in art are determined by rules and principles that the artist could faithfully apply, reject, or, if necessary, re-invent.

Hamilton was able to absorb these rules and principles to rethink the process of representing the world. To reflect the reality of the modern world he applied to painting the sophisticated techniques and rich fantasy of advertising, film and photography. Duchamp crafted his work both physically and mentally, Hamilton took a great deal of trouble to be an intellectual, an artist and a craftsman, using the technical aspect of producing his works as a means to express their worth, both in reality and metaphorically.  He chose to use the latest technology to express modern thought, designing the hardware and software to produce his own view of the visual codex of the last 50 years. Not just the image, the idea behind the thought, the use behind the form, form follows function, the  examination of a process?

Well, not really! I would still like to have questioned him about how and why he got involved with the film Greetings and what was his real involvement with concrete poetry, Fluxus and ‘messy’art, what about the wine tours and did he really turn up at El Bulli in a motor boat? Unfortunately, it’s to late to ask now.