Art, life and the avant-garde 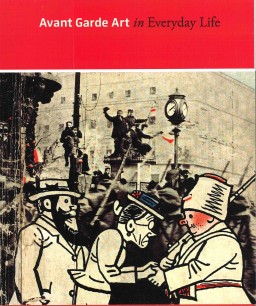 Rejecting the outward elitism of fine art, John Heartfield, Gustav Klutsis, El Lissitzky, Ladislav Sutnar, Karel Teige and Piet Zwart worked enthusiastically in the commercial world of design and communications. There was a seeming contradiction between their commitment to revolutionary politics and their commercial activities and self-perception as ‘technical experts’, professionals and specialists. Avant-garde Art in Everyday Life details the personal projects of these six members of the interwar European avant-garde. Each well-illustrated essay is devoted to an individual artist’s engagement with ‘everyday life’ and the utilitarian objects and images they designed and sometimes imagined in the 1920s and 1930s.

John Heartfield had a pivotal role in the successful creation of the imagery of an alternative socialist life in the Weimar Republic. Heartfield worked in advertising and design politically with the intention of transforming the viewer’s perception of society. He had studied advertising in Munich and Berlin, and Andrés Mario Zervigón explores his application of its techniques in his photomontages, especially that of the Blickfang or ‘eye-catcher’– an attractive and visually surprising image. Heartfield’s 1928 election poster for the German Communist Party (KPD), The Hand has Five Fingers demonstrates its political application.

Photomontage as a distinctly agitational art was also a central element in the book, journal, and poster design of the Latvian artist Gustav Klutsis. Jared Ash’s essay examines his career as an illustrator and designer in the Soviet Union and his application of photomontage – which Klutsis identified as ‘the most aggressive and effective means of class struggle’ – to periodical covers and illustrations and, from 1930, primarily mass-produced propaganda posters.  Lenin had appeared frequently in this work, the imagery becoming increasingly idolatrous, casting Lenin and then Stalin in the role of Leviathan. Ash addresses Klutsis’ understanding of artists’ responsibilities as ‘organisers of everyday life in the new society’ and belief in the role of visual art in its realization.

Maria Gough describes Russian artist El Lissitzky’s conviction of art’s power to transform everyday life through dialogue with, rather than opposition to, ‘its systems of mobility, circulation, and communication’. This dialogue was exemplified by his visionary architectural designs, envisaged as practical solutions to Moscow’s congestion and overcrowding. His designs for books redefined their traditional structure or ‘architecture’ in response to the dematerialisation of communication with the development of telephone and radio. His design for Malevich’s On the New Systems in Art (1919) emphasized the letters and the punctuation of the printed text and was influenced by the graphic devices and typography of Futurism that disrupted the book’s conventional form. His book designs were functional and interactive; they appropriated prosaic and commercial genres. His work for Pelikan, which adopted the aesthetics of modernist abstraction, demonstrated a fascination with advertising that critics found difficult to reconcile with his communist sympathies. But Lissitsky himself did not express any reservations, including examples of his Pelikan work in his portfolio. Gough concludes that he refused to surrender the power of the techniques of modern advertising to capital.

Jindřich Toman considers the career of Ladislav Sutnar, a designer employed by DP (Cooperative Work), a collective founded in 1922 as a book guild that published books and produced glass, ceramics and textiles in modernist styles. Sutnar applied the innovations and approaches of New Typography to those DP publications that promoted a distinctly modernist culture and civilization. From 1930, he created utilitarian design, tableware, cutlery and tea sets for a socially progressive and modernizing middle-class culture in Czechoslovakia.

Like Sutnar, Czech theorist and designer Karel Teige adhered to the ‘New Typography’ and was an important proponent of modernism. A significant focus of Matthew S. Witkovsky’s essay is the ‘picture poem’, a kind of photomontage produced by members of the Czech avant-garde that read like poetry. Teige was an exponent of Constructivism and the ‘dictates of function’ in design but supplemented by Poetism, an ‘ism’ that emphasized play, popular entertainments, and everyday pleasures. Constructivism and Poetism are joined in Teige’s typographical and graphic design.

Piet Zwart was a designer and photographer and also central to the development of modernist design in the earlier 20th century, specifically in the Netherlands. Schwitters and Lissitzky inspired his typography and graphic design; he met both artists in 1923 and began work for the Netherlands Cable Company the same year. He was committed to functionalism, but Nancy J. Troy suggests that the modernist techniques of his mature design work were not incompatible with his youthful decorative designs and projects.

Read together, these essays provide a scholarly, comprehensive account of the complexion of developing avant-garde practices, engagements, and theories in central and Eastern Europe in the earlier 20th century and how, through the design and manufacture of usually fairly ordinary commodities, the avant-garde slogan ‘art into life’ was accomplished practically.

German graphic designer Jan Tschichold (1902–74) published his seminal book  Die Neue Typographie  (The New Typography) in 1928, although already new approaches to typography – the arrangement and appearance of type on the page – were being advanced across Europe. Asymmetrical layouts, use of sans serif type faces, and combinations of type and photomontaged images characterized the movement.

‘Functionalism’ was an important aspect of modernist design and architecture – it was considered vital that the form of an object should be determined primarily by its function, rather than merely ‘decorative’ considerations. The Bauhaus school of art and architecture in Dessau, German (closed by Hitler’s government in 1933) was an influential centre of functionalist design.   Designer Walter Gropius and architect Ludwig Mies van der Rohe were prime exponents of functionalism.

The publication of Avant-Garde Art in Everyday Life: Early-Twentieth-Century European Modernism,  edited by Matthew S. Witkovsky,occurred inconjunction with the exhibition of the same name held at the Art Institute of Chicago between June and October 2011.