Now Ive seen it all – the legacy of Steve Jobs 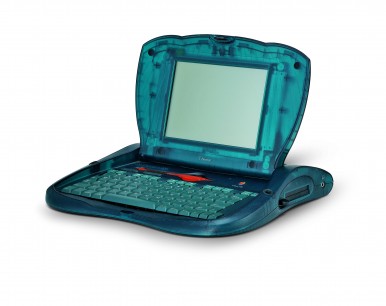 The tidal wave of media coverage following the recent death of Steve Jobs served to highlight the extent to which this one man drove the development of the personal computer over the last 35 years. Almost every article I read was accompanied by a timeline of achievement, with photos of Jobs proudly presenting key products from the company’s history.  Jobs’ influence is undeniable, but such a view is to some extent misleading, in that it plays down the contribution of a huge team of people who together strive to create new Apple products.

Any book on a single company, especially if focused on a single individual, tends by nature towards the celebratory and Apple Design at first looks to put forward the same kind of hero worship, in this case elevating the role of Jonathan Ive, Apple’s lead industrial designer, to almost pop-star status. The book is published in conjunction with a major exhibition of Ive’s work – ‘Stylelectrical: On Electro-Design That Makes History’, showing at the Museum für Kunst und Gewerbe in Hamburg, 26 August 2011 until 15 January 2012 – and reflects the gallery display of objects in its clean, sterile design and exhaustive documentation of every product that the company has shipped since Ive took up the design helm.

The first part of Apple Design consists of a series of largely well-informed essays by different authors covering the role and impact of Apple’s design strategy and though varying in quality, these prove to be of great interest. The first of these, ‘A Tour’, gives an overview of the exhibition and starts with a quote by John Sculley, the ex-president of PepsiCo who ousted Jobs in 1985 and oversaw the near destruction of Apple before Jobs’ return in 1996  – a strange choice perhaps, but his premise, that Apple was always about design rather than invention, is entirely accurate. And design took on an even higher status in the company when Jobs promoted Ive to Senior Vice President of Industrial Design in 1997. Ive’s debut product in this role was the translucent blue iMac of 1998, and Apple has never looked back since.

The following essay, ‘Think Different’, is unfortunately almost unreadable, and considering the subject of the book contains a number of very unfortunate errors – not least wrongly attributing the industrial design of Apple’s most influential product ever, the original 1984 Macintosh, to frog design’s Harmut Esslinger rather than Jerry Manock and Terry Oyama (Esslinger’s ‘Snow White’ design language was not applied to the Macintosh until its redesign in 1987). The third essay, ‘Strategic Design: How the New Eclipses the Old’ is a great improvement, with an insightful discussion on product quality and planned obsolescence, both functional and aesthetic.

It gets better. ‘The Apple Design Lie’ gives a much-needed counterpoint to the pervasive hero worship, being an excellently argued critique of Apple’s design as seen through the lens of Dieter Rams’ ‘Ten Principles for Good Design’. This is directly followed by ‘Kronberg meets Cupertino’ in which the by now well-known Apple/Ive vs. Braun/Rams comparisons are authoritatively examined by a renowned expert on Braun, providing far greater context for the making of Rams as the first German ‘star designer’. It is argued here that Apple’s ‘cool’ status is directly attributable to having an iconic persona in Steve Jobs – worrying now, if true.

The essay ‘Full Metal Jacket’ is an informative piece on the extent to which the choice of materials, in particular, aluminium, can influence form and how effectively Ive has made use of this. The design management perspective is addressed in ‘All New Design’, relating the great story of how the old enemy Microsoft stepped in to save Apple in its hour of need. It presents Apple as an excellent case study to show the value of having a ‘dominant design strategy’: creating products so far ahead of the competition that they define the field and force all competitors into the role of catching up with lesser copies.

The design and unprecedented status of Apple’s retail outlets is the subject of ‘Gardens of Earthly Delights’, calling them ‘theaters of transcendence for our times’, while the final essay, ‘Design in California’ is a slightly rambling historical overview of the creative scene in San Francisco and the elements that came together to allow it to flourish as it has – a subject which deserves to be explored in far more depth than possible here.

The remainder of the book – just over half – is dedicated to cataloguing all Ive’s designs in date order, with all-new photography on plain white backgrounds. While completely devoid of any context, the presentation matches the outward face of Apple’s stores – more boutique than bazaar – to a tee. Starting with the Twentieth Anniversary Macintosh of 1997 (before Ive was made VP of ID) and ending with 2011’s iPad 2, every computer, laptop, iPod, mouse, keyboard, power adaptor and earphones are presented in a seamless flow. The effect is that years of product progress can be seen almost like time-lapse photography. Fantastic as a detailed record, but be warned – for diehard Apple fans only.